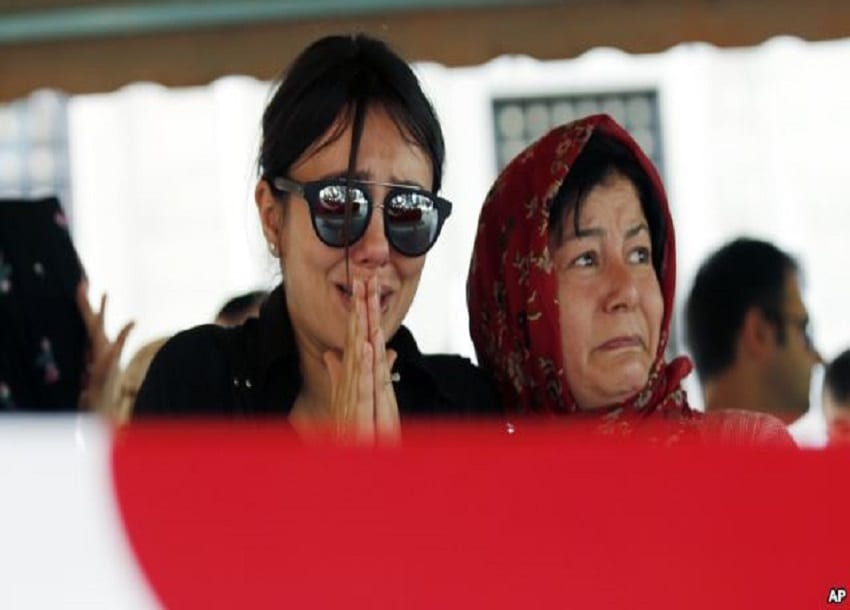 Central Intelligence Agency chief John Brennan says the triple suicide bombing at the Istanbul airport has the “hallmarks” of Islamic State “depravity” and warns the terror group may try the same thing in the U.S.

“You look at what happened in the Turkish airport, these were suicide vests. It’s not that difficult to actually construct and fabricate a suicide vest,” Brennan told Yahoo News Wednesday.

“I am worried from the standpoint of an intelligence professional who looks at the capabilities of Daesh and their determination to kill as many people as possible and to carry out attacks abroad,” he said, using the Arabic name for IS.

No one has claimed responsibility for Tuesday’s terrorist attack on Ataturk International Airport, but Turkey is already blaming the militant group for the assault that left 42 people dead and nearly 250 others injured when three suicide bombers opened fire with assault weapons and then blew themselves up.

Flags across Turkey were at half-staff on Wednesday as the country observed a national day of mourning. Survivors, such as Hungarian traveler Dorka Kardosh, have been sharing their experiences and sending messages of defiance.

“I think we shouldn’t be afraid because that’s their goal. Their goal is to make us afraid; but we cannot live our lives being afraid of going outside,” Kardosh said, referring to the attackers.

Within hours of the bombings, Ataturk airport was reopened. Airport work crews swept up the broken ceiling tiles and shattered glass Wednesday as heavily armed police officers patrolled the terminals.

Turkish Airlines resumed all flight operations, including flights between the U.S. and Istanbul.

Turkish Prime Minister Binali Yildirim said Wednesday that the investigation is ongoing, but that evidence points to Islamic State being behind the attacks, which he said could have been a response to Turkish efforts to improve chilly relations with Russia and Israel.

Yildirim said one of the suicide bombers killed himself outside the terminal, with the other two taking advantage of the panic to shoot their way past security guards and set off their bombs inside the airport.

Video from a security camera shows a huge fireball at the terminal entrance as passengers duck for cover or run away.

Another camera inside the terminal shows one of the bombers falling to the floor, apparently after being shot by police, and blowing himself up.

Later, at a summit of North American leaders in Canada, Obama said the U.S. “will not rest until we have dismantled these networks of hate that have had an impact on the entire civilized world.”

Erdogan said the incident “shows that terrorism strikes with no regard to faith and values.” But he said that his country “has the power, determination and capacity to continue the fight against terrorism until the end.”

The attack on the airport, Europe’s third busiest, is the latest in a wave of bombings in Turkey over the past year that have killed more than 260 people. The terrorism has decimated Turkey’s tourist industry, on which the country’s economy heavily relies.

Islamic State has been blamed for two suicide bombings earlier this year in Istanbul that targeted foreign tourists.

Local media reported Turkish intelligence services warned several weeks ago that Istanbul was facing an imminent threat of attack by Islamic State. Analysts said the jihadist group would most likely strike out after suffering a series of military defeats in Iraq and Syria.