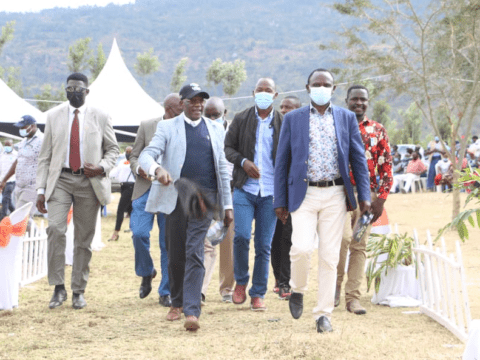 Leaders allied to the United Democratic Alliance (UDA) and Wiper parties on Saturday got into a near fist fight in Kathyioli village, Machakos County, when they met at the funeral of James Muthama, the father of former UDA senatorial candidate Urbanus Muthama Ngengele.

Trouble began when Mwala MP Vincent Musyoka took to the podium to welcome the leaders but was accused of not following any protocol.

He was heckled when he criticised Wiper leader Kalonzo Musyoka saying he has “failed both locally and nationally” hence cannot lead the country.

Machakos Town MP Victor Munyaka said 7 leading national leaders seem to be aligning against Deputy President William Ruto, adding that “nobody can throw stones to a dead dog”, intimating that the DP is a threat in the race.

He was booed when he said “Kalonzo is not going anywhere” and he had to stop his speech for a while as MP Musyoka tried to calm the crowd .

Senator Kavindu, on her part, called for respect to be accorded towards the Wiper Party boss saying “Kalonzo is Kenya’s next president.”

Khalwale said leaders should ask for votes based on their score cards, urging the Wiper party leaders to “stop tribal politics and seek national unity and development.”

Former Senator Muthama said he has tried to put Kalonzo on the national grid for years but it did not work hence his reason for joining UDA.

While the Wiper leaders vouched for Kalonzo saying he is ripe for the presidency come 2022, UDA politicians led by Muthama urged the community to be strategic and ensure they are not left out of the next government.