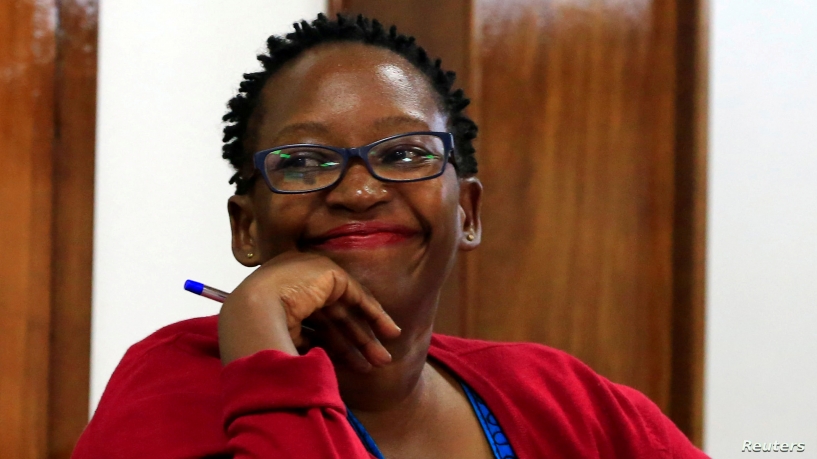 In a cacophonous sentencing filled with profanity and nudity, a Ugandan court has found activist Stella Nyanzi guilty of “cyber harassment” for posting a poem on Facebook that harshly criticized President Yoweri Museveni.

Nyanzi was sentenced Friday to 18 months in Luzira Women’s Prison, in suburban Kampala. She has already served nine months while awaiting trial.

Magistrate Gladys Kamasanyu said she opted for a prison sentence rather than a fine because Nyanzi showed no remorse, and because incidents of cyber harassment are on the rise.

During the heated hearing Friday, Nyanzi, who appeared in the courtroom via a video feed from the maximum-security prison where she’s been held, repeatedly shouted profanities and flashed her breasts, with prison guards standing behind.

Supporters in the courtroom responded to her ongoing acts of defiance with applause. Nyanzi said she gladly accepted the punishment, adding that she was “born for this moment.”

Nyanzi has become an international celebrity, and her case has become a rallying cry for free speech activists, feminists and opponents of Uganda’s longtime ruler.

Supporters of Nyanzi believe the Ugandan government is seeking to silence criticism of the president under the guise of enforcing good conduct online. Still, Nyanzi’s crude poetry and outrageous behavior have divided public opinion, with some feeling she goes too far.

“Many people think that her words should not be accepted,” said Rosebell Kagumire, editor of Africanfeminism.com, a platform for feminist writers from the continent. “So, Stella in a way that challenges the morality, (the) moral fabric of society (and) what people hold to be moral … shakes this up and says, ‘No, we can say these words and can use them to shock, and use public insults against people in power.’ ”

Kagumire said Nyanzi is being charged under Uganda’s 2011 Computer Misuse Act, a law ostensibly intended to protect people from online harassment and threats that has instead been used to muffle government critics. Kagumire said the law is being challenged in the constitutional court.

“It kind of brings back this aspect of sedition that, actually, someone in power can jail people for offending them, which should be protected speech,” she said.

Nyanzi received a vote of support from Amnesty International.

“Stella Nyanzi has been criminalized solely for her creative flair of using metaphors and what may be considered insulting language to criticize President Museveni’s leadership,” said Joan Nyanyuki, Amnesty’s director for East Africa, the Horn and the Great Lakes. “Public officials, including those exercising the highest political authority, are legitimately subject to criticism and political opposition.”

Nyanzi has long fought for change in Uganda. She led campaigns advocating for gay rights and for sanitary pads for schoolgirls. In 2017, authorities arrested her for publishing a similarly critical post.

Some have seen Nyanzi’s protests as a form of “radical rudeness,” and Nyanzi herself has described her role as part of a Ugandan tradition of pushing for change through offensive words and shocking acts.

“I planned to offend Yoweri Museveni Kaguta because he has offended us for 30-plus years,” Nyanzi said during the raucous court proceeding.

Museveni, 74, has led Uganda for 33 years. The country’s constitution was recently amended, allowing him to seek re-election after turning 75. Critics say his rule has been marked by ruthless clampdowns on dissenting voices.

Nyanzi told the court Friday that her activism is on behalf of her children, who, she said, should grow up in a better society.