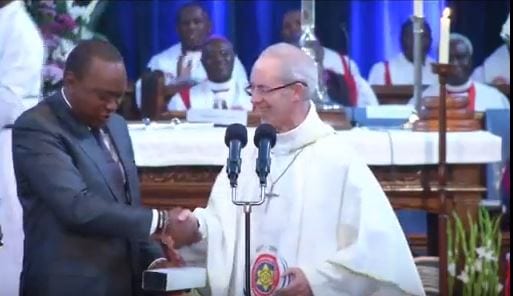 President Uhuru Kenyatta has said that the country will heed the call by the global Anglican Church for reconciliation to resolve the ongoing political impasse occasioned by the October 26 poll.

Kenyatta said this soon after receiving a gift from the Archbishop of Canterbury, Justin Welby, who graced the 100 year celebration service of the All Saints Cathedral on Sunday, November 5.

In his address to congregants of the centenary celebration service at the All Saints Cathedral, the head of the global Anglican Church called for reconciliation in Kenya, saying that this is the call of the faithful in solving disputes at both a personal level and on the national stage.

“Reconciliation is not mediation or arbitration or trickery and abandoning principle, it is the transformation of violent and destructive conflict into lives in which disagreement is still there but is dealt with peacefully for the common good,” said Archbishop Welby.

The Anglican Church leader further said, “I’m not calling for mediation, but for the steady and long term work of building structures of reconciliation, the capacity to deal with a nation’s challenges in a way that brings peace even when there is deep disagreement.”

The Bishop of the Church of England also stated that reconciliation was rare worldwide even as he urged Kenyans to set an example among the world’s nations.

Archbishop Welby hailed Kenya as an example of democracy in Africa, terming the nation as a regional leader where people lived in harmony despite different ideologies and faith.

“Since independence, Kenya has been a model for Africa, without coup d’etat, without civil war… yes with problems and trials, but for the most part keeping the peace. Can you not show us how to be a country of reconciliation,” said Archbishop Welby.