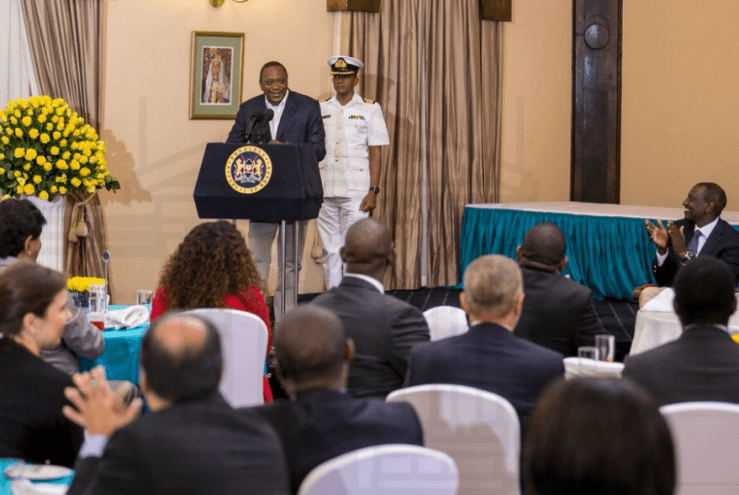 President Uhuru Kenyatta on Thursday hosted stakeholders at State House to celebrate Kenya’s remarkable performance in the recently released World Bank ease of doing business index in which the country was ranked position 61 globally, up from position 80 last year.

The President thanked the team led by Deputy President William Ruto for a job well done and encouraged them to work even harder in order to achieve the targeted position 50 by 2020.

The World Bank Report, Doing Business 2019, ranks Kenya at position 7 among the 10 most improved economies in the Doing Business Index, a strong statement of confidence by the world about Kenya’s economic outlook.

The new ranking marks the fifth year-on-year improvement in the country’s overall ranking since 2014, moving 75 places from position 136 to position 61.

The World Bank report compares business regulations for domestic firms in 190 economies globally, reviewing various parameters on the ease of doing business that include the ease of getting credit, protection of minority investors, resolving insolvency, paying taxes and trading across borders.

The President encouraged the various state agencies to speed up reforms aimed at boosting the country’s agenda for improving the ease of doing business.

The stakeholders at the breakfast meeting included representatives from the Kenya Private Sector Alliance (KEPSA) and development partners among them Britain and the Netherlands.

Turning his attention to the local media, President Kenyatta told the fourth estate, that, while the government is not worried about being corrected, the criticism should be positive and aimed at finding solutions.

“We as the government, we are not worried about being challenged. As I always tell the fourth estate, you can say what you want about me but never forget you are Kenyan,” said the President.

He added: “Let us be positive about our country. Let us criticize positively with a view of getting solutions not of highlighting division and bringing animosity.”

He said some headlines and reports by the local media were quite frightening because they mostly dwelt on non-existent issues.

The President said Kenya, like any other society, is not a perfect one but the media should always strive to project the best version of Kenyans.

“Remember always that how you speak of the country will reflect on how we are perceived externally. We are not a perfect society, far from it but we are great people and we should always strive to project the best version of ourselves as a country,” said the Head of State.

He said despite the positive World Bank report, Kenya’s reform agenda is not complete adding that there is always room for improvement.

The President noted that the focus on the “ease of Doing Business” has made Kenya’s business sector more productive and globally competitive.

“Our investment levels have risen from $350m in 2013 to $2bn in 2017. We have more than doubled our collections of revenue from the companies registry from Ksh.150M in 2014 to Ksh.365M in 2017, with a corresponding increase in the number of companies registered daily up from an average of 30 per day in 2014 to 200 companies daily as at the end of 2017,” said the President to illustrate the growth of Kenya’s economy.

The President reiterated that the war on corruption was work in progress saying: “We are systematically closing down the loopholes in government procurement processes that create easy opportunities for graft.”

The Head of State reassured the business community that the criminal justice system had been strengthened and its capacity enhanced all the way from the investigative agencies to the judiciary.

“We continue to cooperate with international agencies to monitor and recover the proceeds of corruption,” he added.

On his part the Deputy President said the World Bank report marks a proud moment for Kenya but the country should not forget to pursue its target for position 50 globally by 2020.

The DP said there was also need to reduce some government processes in the registration of business, reduce corruption and restore integrity of our system to expand the economy.

“We must remove the many processes in business registration, digitize  and restore the integrity of our system”, the DP said.