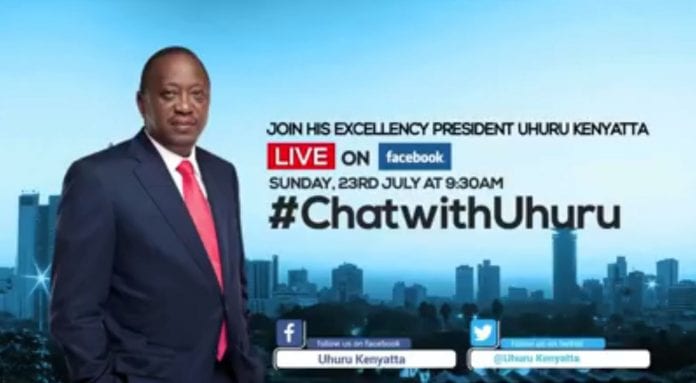 With only 15 days to the August 8 General Election, President Uhuru Kenyatta took his re-election bid digital in a Facebook chat with online supporters on Sunday morning.

In an online chat that lasted for less than an hour, the Head of State interacted with Kenyans answering questions and highlighting his Jubilee administration’s key achievements in the last four years in office and re-stated his case for re-election next month.

Responding to a question about the high unemployment rate among young Kenyans, the president promised to create job opportunities by building and improving infrastructure.

President Kenyatta promised to initiate even more infrastructural projects including the construction of dams in arid and semi-arid areas, building roads, connecting people to electricity, completing the SGR project as well as improving the efficiency of ports in order to make Kenya an attractive investment hub.

“New companies have started businesses in Kenyan as a result of infrastructure development and in turn, our youths are getting employment. We intend to do more of these,” said President Kenyatta while responding to a Facebook user, Ben Kirui, who had said that despite being a skilled professional he was hunting for a job.

President Kenyatta was taken to task by Facebook users over the corruption menace, expressing dissatisfaction in how the government has handled the vice.

However, President Kenyatta defended his government insisting that corruption is a problem that is not a creation of the  Jubilee regime but one that has been inherited from previous administrations.

The Head of State said that the stepping aside and resignations of several Cabinet Secretaries proves that he is committed to the fight against corruption but faulted the Judiciary for the slow prosecution of cases.

“I want to task the Judiciary to also chip in and do their part in fighting corruption…because the EACC has many unresolved corruption cases. Kenyans deserve to see people implicated in graft charged and public monies recovered,” said President Kenyatta.

“Raila has to defeat me first and I intend to defeat him. I have done [it] in the past and we will do in the future, accepting the will of the people. I will do everything in my power to ensure a smooth transition if defeated. But I urge Kenyans to give me another opportunity to build this nation,” said the president.

On a lighter note, one Facebook user was curious to know how and when President Kenyatta met the First Lady Margaret Kenyatta.

President Kenyatta said he met the “love of his life” when he was still at St. Mary’s School, Nairobi.

“I have to say that when I met her she was not a First Lady. But I first met her brother who we were in high school together. Our relationship has lasted from high school to now,” explained the president.