UHURU KENYATTA: Why I should be sworn in on 28th November 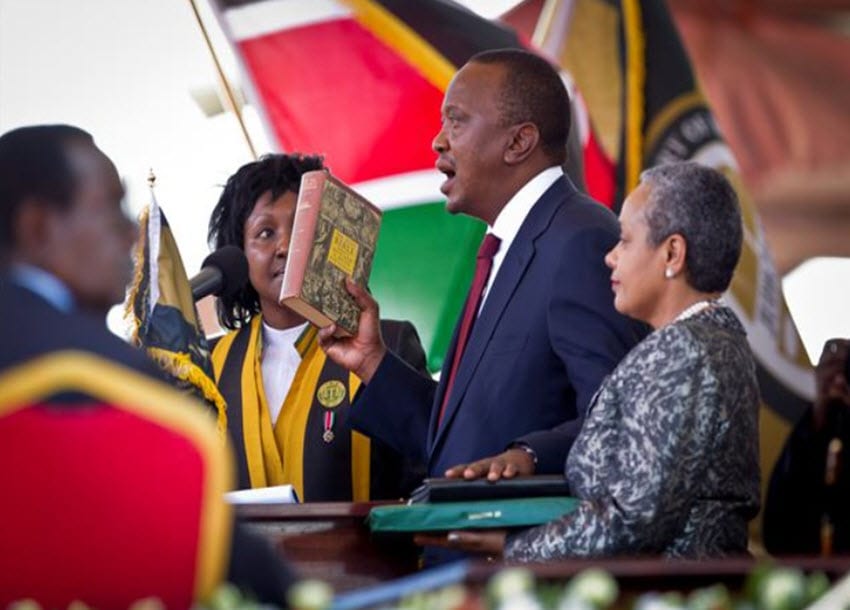 President Uhuru Kenyatta on Sunday, November 12 presented his response to the petition filed at the Supreme Court challenging his re-election in the October 26 election.

Mr Kenyatta has been listed as the third respondent in the petition filed by activists Njonjo Mue and Khelef Khalifa.

In his affidavit filed through Ogetto, Otachi & Company Advocates, the president-elect has outlined why he believes he validly won the fresh poll, which was boycotted by his main rival; NASA leader Raila Odinga.

According to Kenyatta, the petitioners are not in any way advancing a public interest, as they claim in the petition, but “are surrogates, agents and mouthpiece of the NASA coalition (4th respondent)”.

NASA was out to scuttle fresh presidential election

The Jubilee presidential candidate categorically blames NASA, its leadership and supporters whom he says deliberately set out to make a “brazenly and unlawful” attempt to make sure that no repeat election would be held as scheduled by the Independent Electoral and Boundaries Commission (IEBC).

“This was evidenced by numerous demonstrations organized by NASA, coming with irreducible minimums that are not feasible, issuing threats to IEBC staffs, calling on supporters to boycott poll and preventing a section of Kenyans from voting through intimidation,” reads part of the response.

Independence of IEBC and Judiciary

President Kenyatta has strongly refuted claims made by the petitioners that he interfered with the independence of the electoral commission.

He insists that he has on numerous occasions assured that he would support the electoral commission to hold a free, fair and credible election by providing the necessary financial budget and also support other independent institutions in the country in executing their mandate.

In the same breath, Kenyatta has also downplayed allegations in the petition that he tried to intimidate the Judiciary, and more so created a public holiday on the 25th of October, just a day to the fresh election, to circumvent the process of administration of justice.

“The declaration of a public holiday was to facilitate the travel and participation of voters in the 26th October 2017 fresh presidential election and was not intended to interfere and did not in fact interfere with the functioning of the courts on critical matters before the courts,” argues Kenyatta.

The petitioners have argued that Kenyans in 27 constituencies in NASA strongholds were denied their right to vote and therefore the repeat poll stands nullified.

However, Kenyatta says that IEBC conducted all the necessary preparations and processes for every Kenyan to vote, only for their efforts to be subverted by the opposition.

“IEBC and chairperson Wafula Chebukati did not in any way discriminate or disenfranchise any voters including the voters in the 27 Constituencies as complained, or at all. While the right to vote is a fundamental human right, it can only be enforced in conditions of willingness by the voter to exercise it and absence of external factors as was present in the areas,” argues the president-elect.

Kenyatta has remained upbeat that based on communication from the IEBC, no electoral illegalities or irregularities – vices that were the main undoing and led to nullification of the August 8 presidential election – were committed during the repeat election.

According to Kenyatta, IEBC was more cautious this time round in ensuring that the electoral process was as transparent as possible.

“More than 97% of persons who voted were identified through their Biometrics in the KIEMS kits; total number of registered voters remained the same between June and October contrary to the averments contained in the petition; IEBC published information relating to voter turnout,” says Kenyatta.

With the petitioners arguing that since no fresh nominations were conducted before the fresh election the whole process was illegal, Kenyatta refutes this claim and further asserts that primaries which were conducted prior to August 8 election still stood in the fresh poll and the eight presidential candidates were gazetted legally.

He further says that the Supreme Court ordered for a fresh election, and not nomination, between Jubilee’s Kenyatta and NASA’s Odinga.

Meanwhile, the clock has already began ticking to the court’s verdict that must be rendered by November 20th, to determine if Kenyatta will be sworn in on November 28th or Kenyans will return to the ballot for the third time in six months, in mid-January next year.