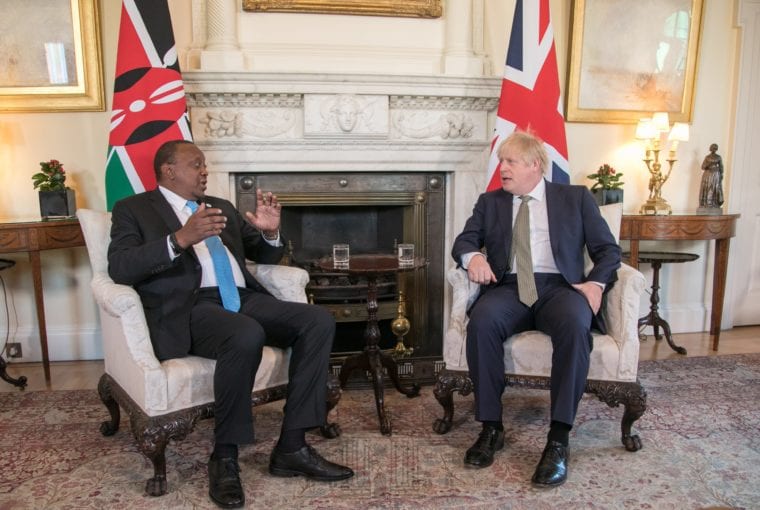 President Uhuru Kenyatta held talks with British Prime Minister Boris Johnson focused on scaling up the robust ties between Kenya and the UK.

During the meeting at 10 Downing Street in London, President Kenyatta and PM Johnson discussed the Kenya-UK trade in the post-Brexit era, cooperation in military training and security.

“We are doing well on renewable energy and certainly we would like to partner with you,” PM Johnson told President Kenyatta on Tuesday.

On trade, Prime Minister Johnson said the UK recognized Kenya as a key partner in Africa.

He pointed out that trade between the two countries has grown over the years but there was still room for expansion, citing the growing demand for Kenyan products such as tea.

The two leaders also discussed the effects of travel advisories and the PM assured that they will be abolished as they have a negative effect on the economy.

President Kenyatta thanked PM Johnson for recognizing the disadvantages of the travel advisories and his assurance that they will not be imposed on Kenya again.

“What happens when these travel advisories are issued is that there are job losses especially in the tourism sector presenting an opportunity for radicalization of our young people,” President Kenyatta said.

The President and the PM also discussed partnerships between the two countries in green technology investments, an area the UK has made significant milestones.

On security, the President Kenyatta and the PM agreed that Kenya and the UK should cooperate more in the fight against terrorism.

“We would like to partner in combating terrorists. These criminals have continued to cause harm to our people and it is about time we combined forces to fight back,” President Kenyatta said.

Prime Minister Johnson acknowledged that Kenya has borne the brunt of terrorism and there was need to join forces to curb the menace.

PM Johnson said the British military training outpost in Nanyuki will continue to train Kenyan officers as a way of bolstering the military partnership between the two countries.

On the Nairobi regeneration program, President Kenyatta said Kenya is keen to ensure that Nairobi’s lost glory as the “city in the sun” is restored.

“The regeneration program is on course but other than that we also seek viable transport solutions for our people. This is also an area that we can partner in,” President Kenyatta said.

He welcomed the PM’s assurance that the UK is keen to work with Kenya on the provision of urban planning and transport solutions.

The two leaders also agreed to join forces in the provision of affordable houses in Kenya, one of the key pillars of the Big 4 Agenda.

Citing some of the old housing estates constructed in Nairobi’s Eastlands in partnership with the British Government, President Kenyatta said UK’s involvement in the current push to provide affordable housing in Kenya would secure program’s success.

The President was accompanied to the meeting by Cabinet Secretaries Ukur Yatani, Monica Juma and Adan Mohammed as well as Kenya’s High Commissioner to the UK Amb. Manoah Esipisu.