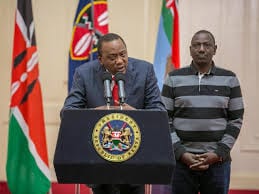 Just a day after the Supreme Court of Kenya annulled his election win last month and ordered a new poll within 60 days, President Uhuru Kenyatta has launched a scathing attack on the Judiciary saying that it is a problem that must be fixed.

Speaking at State House, Nairobi on Saturday, September 2, President Kenyatta once again reiterated that he validly won the August 8, 2017 presidential elections, exuding confidence that he will still trounce Raila Odinga in the repeat polls.

President Kenyatta branded Chief Justice David Maraga-led Judiciary ‘hypocrites’, owing to the fact that the court system sent its judges countrywide to swear-in governors, yet it says that that electoral process was not as the constitution dictates.

“We clearly have a problem with our Judiciary, and we shall re-visit this thing. We are not scared of you, you have done your ruling and we shall respect. Let IEBC come up with a date so that we prove that we won fairly,” said President Kenyatta.

Deputy President William Ruto also repeated his message from Friday, September 1 that four Supreme Court Judges tried to subvert the will of 15 million people and that they will prove them wrong in the repeat polls.

“We are not stupid, how is it possible to win the majority in both National Assembly and Senate and that we haven’t won the presidential elections? What kind of logic is that to Maraga and his three colleagues?” questioned DP Ruto.

The DP said that the electoral commission, IEBC, as currently constituted will conduct the fresh polls, something that will spike angry jibes from the opposition National Super Alliance (NASA) which has said that they are not comfortable that the current Wafula Chebukati-led commission will be able to conduct free, fair and credible elections.