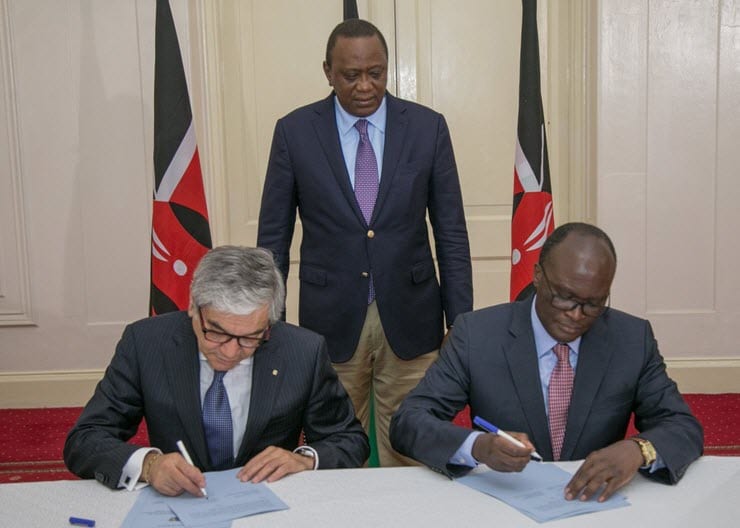 President Uhuru Kenyatta on Thursday witnessed the signing of a Memorandum of Understanding (MoU) between the Ministry of Transport and Infrastructure and the Mediterranean Shipping Company (MSC) for the revival of the Kenya National Shipping Line (KNSL).

The MoU was signed by Transport and Infrastructure Cabinet Secretary James Macharia and Captain Giovanni Cuomo, the First Vice President of Mediterranean Shipping Company (MSC) which is one of the leading global container shipping companies in the world.

Speaking during the signing ceremony at State House, Nairobi, President Kenyatta said the revival of the shipping line was a priority for Kenya because it would create jobs for thousands of Kenyans.

The Head of State welcomed the Government’s partnership with the Mediterranean Shipping Company in the revival efforts, saying he expects the relevant teams to work with dedication and speed so that the shipping line is launched soon.

“This is a valued partnership between Kenya and the private sector. I look forward to launching the shipping line soon,” the Head of State said.

In reviving KNSL through the partnership with MSC, the shipping line is expected to once again become an active participant in international seaborne trade which accounts for a significant percentage of Kenya’s total trade.

The revival of the shipping line and the upgrading of Bandari College into a centre of excellence for maritime studies which was approved by the Cabinet this week is set to transform Mombasa into a trans-shipment hub in the region and is a huge boost to the ongoing efforts to mainstream blue economy as an important economic activity in the country.

The Kenya National Shipping Line was established in 1987 as the national carrier for seaborne trade but years of mismanagement led to its near collapse necessitating the current proactive efforts to restart its operations.