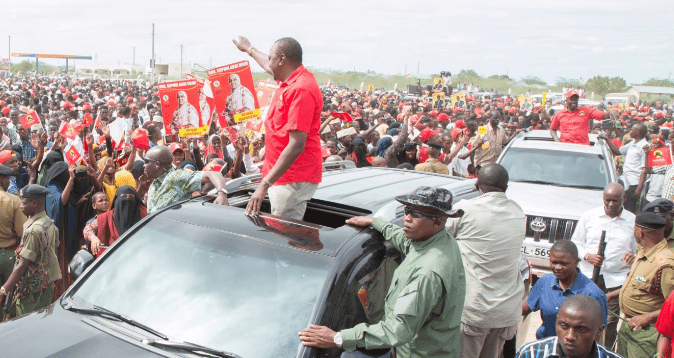 This time round, two people, among them an Administration Police officer, were injured in the chaos that erupted earlier today (June 26) at Saku area in Marsabit County as police were forced to fire teargas canisters to disperse the youth.

It is believed that youth allied to Governor Yattani, who will be defending his seat on a Frontier Alliance Party, were in attendance in the rally, something that led to clash of ideas with those allied to Mr. Abshiro, who is the Jubilee gubernatorial candidate.

Reports reaching the Citizen Digital indicate that the three who sustained gunshot wounds during chaos that erupted at Moi Girls School in Marsabit before President Kenyatta’s arrival have been transferred to Kenyatta National Hospital in Nairobi.

With clan politics, negotiated democracy, taking center-stage just like in neighboring Mandera County, it is believed that a candidate who will be able to marshal support from tribes like Borana, Rendille, Burji and Gare will be able to take the day come August 8 General Election.

Governor Yattani, who was elected in 2013 on an ODM ticket, is facing fierce competition from Mr. Abshiro whom he defeated back then when he was running on a United Republican Party (URP).

However, police contained the situation and the President was able to continue with his campaigns and shied away from openly throwing support behind Jubilee candidate, telling the people to make their own decision in choosing local leaders but to vote overwhelmingly for him.