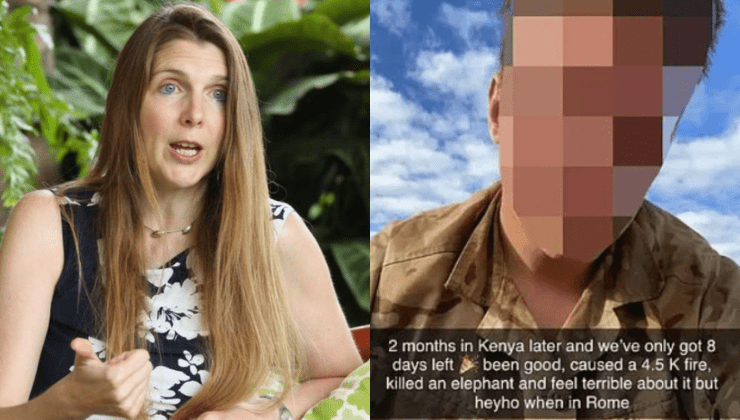 UK High Commissioner to Kenya Jane Marriott has expressed great disappointment at a social media post by a British soldier alluding to a fire at the Lolldaiga military training area in Nanyuki, Laikipia County.

The unnamed soldier took to Snapchat on March 20, 2021 to post the message: “Two months in Kenya later and we’ve only got eight days left. Been good, caused a fire, killed an elephant and feel terrible about it but hey-ho, when in Rome.”

The post has since elicited uproar from Kenyans online, coming on the back of news of yet another fire that reportedly started on Wednesday and killed five elephants.

However, according to the UK High Commission, the post by the British soldier is highly regrettable and will be investigated internally.

“I’ve seen that Snapchat account and I’m utterly appalled…I think that is outrageous and I’m very disappointed that a British soldier would post that. It is being investigated. There will be an internal British investigation by the Royal Military Police,” said Marriott during an exclusive interview with Citizen TV.

The post, however, could have been in reference to an earlier fire which the UK High Commissioner denied any knowledge of.

She stated that the fire that started on Wednesday and reportedly killed five elephants was still going on and all was being done to put it out.

Marriott said all training exercise has since been halted with all personnel, among them 350 troops, deployed to beat the fire.

Three helicopters and a crop-sprayer aircraft have been dispatched to pour water on the fire from above while four water tanker trucks are dumping water on the ground.

“It’s been going for a couple of days now, we’ve got tough conditions out there…we’ve got high winds and grass that is super dry and rains that are late, those are perfect conditions for a fire to spread,” she said.

“The cause of the fire was a British training exercise. It’s absolutely devastating and we’re doing all we can to do get the fire under control.”