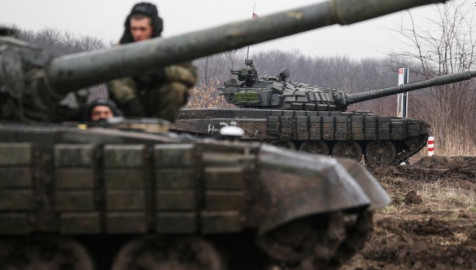 Ukraine has warned that Russia has "almost completed" its build-up of forces that could be used for an offensive against the country, compounding fears that Moscow could launch an invasion at any time.

According to the Ukrainian Defense Ministry's latest intelligence assessment -- shared exclusively Tuesday with CNN -- Russia has now deployed more than 127,000 troops in the region.

"The full strength of RF AF (Russian Federation's Armed Forces) land group at the Ukrainian direction -- (is) over 106,000 personnel. Together with the sea and air component, the total number of personnel is over 127,000 servicemen," the assessment said.

The assessment called the situation "difficult," and said Ukraine believes Russia is "trying to split and weaken the European Union and NATO."

Russia's actions are also "aimed at limiting the capabilities of the United States," the assessment said, "to ensure security on the European continent."

The assessment comes after three rounds of diplomatic talks between Russia and the West aimed at de-escalating the crisis failed to produce a resolution last week.

US Deputy Secretary of State Wendy Sherman said last Wednesday it was unclear whether Moscow intended to use the talks as a pretext to claim that diplomacy cannot work.

Ukrainian military intelligence said Russia has deployed troops from its central and eastern regions to its western border "on a permanent basis." At the end of December and in January, Russia has been moving "stockpiles of ammunition, field hospitals and security services" to the border, it said, which according to Ukraine "confirms the preparation for offensive operations."

Russia's intelligence activity against Ukraine has also intensified, the assessment said, with additional radio and satellite traffic units being deployed near the Ukrainian border and reconnaissance flights along the border having tripled since this time last year.

The Ukrainian military also said Russia could use medium-range missile weapons to "destroy vital objects," noting "additional tactical groups of 'Iskander' operational-tactical missiles" have been transferred to the border.

As of mid-January, there are 36 Iskander launchers near Ukraine, according to the assessment.

Iskander missiles are capable of striking targets 500-700 km (approximately 310-430 miles) away and could now target areas including the capital, Kyiv, it said.

The Ukrainian document warned a new potential front line has now emerged along its northern border with Belarus, a key Kremlin ally.

"The territory of Belarus should be considered as a full-fledged theater of operations that Russia can use to expand aggression against Ukraine," the Ukrainian military intelligence document said.

US State Department officials underlined those concerns Tuesday, saying Russia's bolstered troop presence in Belarus has increased their capabilities along the Ukrainian border and led to heightened concerns about an invasion.

"What it represents is an increased capability for Russia to launch this attack. Increased opportunity, increased avenues, increased risk," a senior US State Department official said, adding that the troops were moved into Belarus without sufficient notice.

In Belarus, Russia is "preying on (Belarusian leader Alexander) Lukashenko's vulnerability and calling in some of those accumulated IOUs," the official said.

"The timing is notable and of course raises concerns that Russia could intend to station troops in Belarus under the guise of joint military exercises in order potentially to attack Ukraine from the North," the official said.

While the official would not speak to Russian President Vladimir Putin's intent when it comes to moving troops into Belarus, the official described Putin as "an opportunist."

"We've seen warning signs that the dynamics inside Belarus are enabling Russia to further prey on Lukashenko's self-inflicted vulnerability," the official said.

US officials have said a Russian invasion of Ukraine could happen at any point in the next month or two.

"Russian military plans to begin activities several weeks before a military invasion are something we've been watching closely and our assessment has been that could happen anytime between mid-January and mid-February," a second senior State Department official explained.

The United States is looking closely at whether Lukashenko still has the levers of control in his country -- or whether the decision-making has been largely passed over to Russia.

Belarus has become an "increasingly destabilizing actor in the region" the first State Department official said, pointing to a number of recent actions such as manufacturing a migrant crisis on the Poland-Belarus border, arresting activists and holding more than 900 political prisoners.

Ukraine's assessment comes as the country's former President, Petro Poroshenko, told CNN's Christiane Amanpour on Tuesday that "the whole world should be united against Putin," and that Ukraine should be allowed to join NATO.

The billionaire led Ukraine from 2014 until 2019, taking power shortly after Russia invaded and subsequently annexed Crimea. He was defeated in the 2019 presidential election by incumbent Volodymyr Zelensky.

"It is absolutely necessary that there is international solidarity and unity" against Putin, Poroshenko said, adding that Western allies should not trust the Russian leader.

Poroshenko also said "nobody knows, including Putin" whether a Russian invasion will actually happen and a lot will depend on the introduction of sanctions. Calling a potential invasion a "crazy decision," he said the international community should "increase significantly the price Putin should pay" if Russian forces cross the Ukrainian border.

When asked whether endemic corruption is a reason Ukraine has not been accepted as a member of NATO, Poroshenko pointed blame at his successor, Zelensky, for a "backslide" of corruption reforms.

Poroshenko returned to the capital, Kyiv, on Monday to face treason charges linked to the financing of Russian-backed separatist fighters through illegal coal sales in 2014 and 2015.

When pressed on the charges he faces, Poroshenko said the accusations were "politically motivated" and that prosecutors had "zero evidence."

According to Reuters, critics say his return to Ukraine is serving as an badly timed distraction amid the political crisis with Russia.