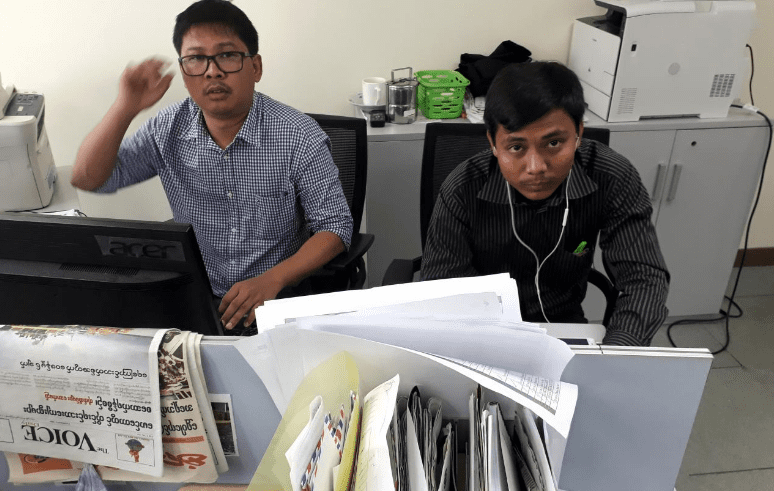 Two Reuters reporters arrested in Myanmar had not passed any information to the United Nations, the world body said, rejecting a report published in domestic media which suggested that could be the reason for their detention.

A report published online by the Irrawaddy magazine on Tuesday had cited an unnamed source “who has close ties with military intelligence” as saying that the two men had passed photographs obtained during their reporting on violence in the western state of Rakhine to the UN.

Asked about the report, UN spokesman Stephane Dujarric said on Wednesday: “We can confirm that Wa Lone and Kyaw Soe Oo do not work for the United Nations and have not contacted the United Nations regarding the situation in Rakhine State.”

Reuters also denied that Wa Lone, 31, and Kyaw Soe Oo, 27, who have been in detention since Dec. 12, had worked with the UN or any other organization.

“We reject the assertion that Wa Lone and Kyaw Soe Oo were working with any organization other than Reuters,” said a spokeswoman for the news agency, when asked about the Irrawaddy report.

“They were engaged only in independent, unbiased reporting consistent with the Thomson Reuters Trust Principles.”

A government spokesman was not immediately available for comment.

Myanmar authorities have said the two journalists are being investigated over whether they violated the country’s colonial-era Official Secrets Act. The act carries a maximum prison sentence of 14 years.

The two journalists had worked on Reuters coverage of the crisis in Rakhine, where an estimated 655,000 Rohingya Muslims have fled from a fierce military crackdown on militants.

A number of governments and human rights and journalist groups have criticized Myanmar’s authorities for holding the pair incommunicado since their arrest, with no access to a lawyer, colleagues and family members.

A senior government spokesman said on Wednesday that the pair were in good health and had been well treated. The authorities have previously said that the arrest of the two men did not represent an attack on press freedom.