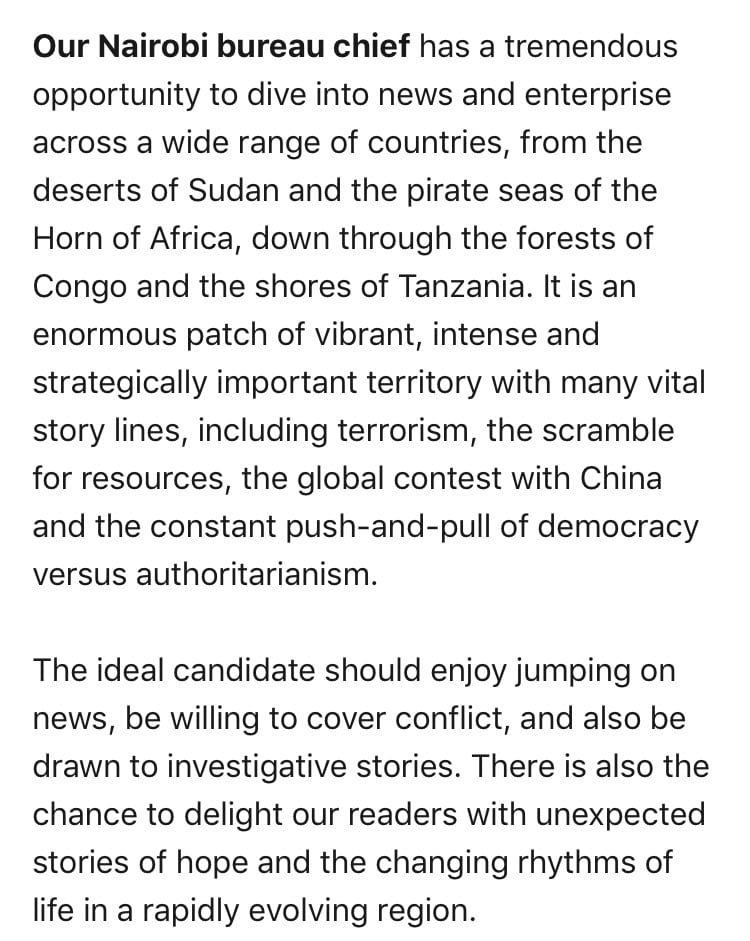 The New York Times has once more come under heavy criticism from Kenyans on social media over the format of a recent call-out for a Nairobi bureau chief.

The announcement of the vacancy at the American media outlet’s Nairobi office was posted on their LinkedIn account on Wednesday.

“Our Nairobi bureau chief has a tremendous opportunity to dive into news and enterprise across a wide range of countries, from the deserts of Sudan and the pirate seas of the Horn of Africa, down through the forests of Congo and the shores of Tanzania,” read part of the job description.

“It is an enormous patch of vibrant, intense and strategically important territory with many vital story lines, including terrorism, the scramble for resources, the global contest with China and the constant push-and-pull of democracy versus authoritarianism.”

NYT further added: “The ideal candidate should enjoy jumping on news, be willing to cover conflict, and also be drawn to investigative stories. There is also the chance to delight our readers with unexpected stories of hope and the changing rhythms of life in a rapidly evolving region.”

Kenyans on Twitter (KOT) have however faulted the wording used in the announcement saying it paints Eastern Africa in bad light.

Many also condemned the media outlet for allegedly seeking only rather negative stories from the region and the continent at large.

Others even questioned why NYT would not include – in the advert – that it was seeking someone able to dig out positive stories from the region such as innovation or the impact of mobile money services.

The ⁦@nytimes⁩’ job ad for Nairobi bureau chief says a lot about the kinds of stories they want from Eastern Africa… pic.twitter.com/esEeOMI18l

As a lifelong African, I’m overjoyed that a benevolent New York Times correspondent will soon patrol our pirate seas & deserts, occasionally telling our unexpected stories of hope. I live for the white gaze https://t.co/7t6IJjyf3C

From a country that has children in cages and regularly has mass shootings, to be so self-unaware is pretty much on brand. We haven't forgotten Kimiko's foolishness.

Nothing there about the mobile money transformation taking place in rapidly digitizing economy (now that we've got research proving mobile money helps with formalization)? Not a peep about East Africa the fastest growing region on the continent? What about innovation? Marathons?

Really? From the "deserts" and "pirate seas" to "terrorism", "the scramble for resources" and "unexpected stories of hope"… @nytimes please think again about the kind of stories that you want from the region and the kind of person that you want to cover them!

NYT just wants narratives that feed neocolonial agendas. Their rhetoric of “the poor, oppressed, savage, dirty, illiterate” African who needs a white man’s pity for survival facilitates exploitation of African countries under the assumption of divine salvation. We see you.

They are looking for someone who will scrap at the very bottom with such vapidity to feed the otherly narrative. @nytimes literally holding out its plate for more pork! Shame!

It is not funny but I had to laugh. Presumably stories of hope in Africa can only be « unexpected « ! I also got the sense this ad is implicitly not directed at potential African candidates….

NYT has previously been trolled by Kenyans online when it published photos of the dead during the January Dusit terror attack.

Coincidentally, the author of the story – Kimiko de Freytas – was poised to become the NYT East African bureau chief prior to the coverage.

She however changed her Twitter bio to read “Foreign Correspondent at The New York Times” following the outrage that came on the backdrop of the article.