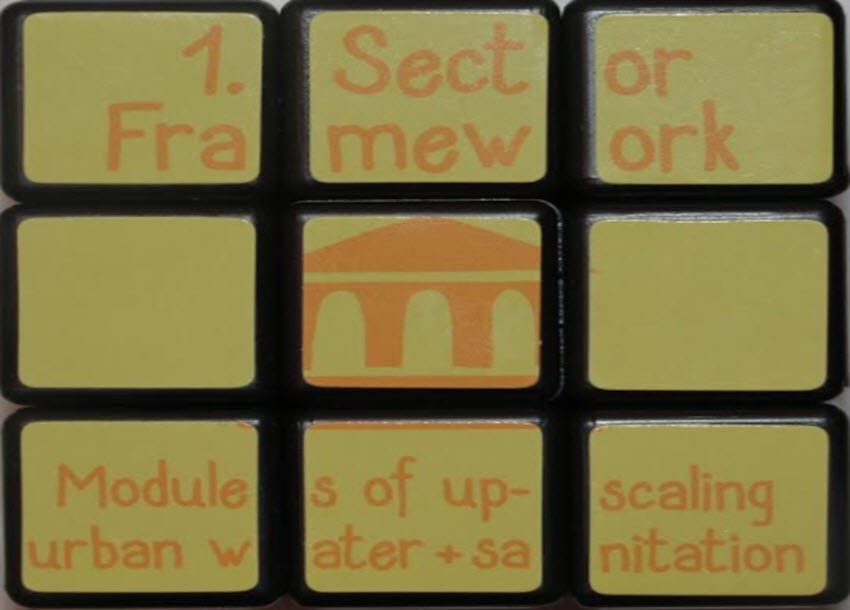 Stockholm Sept 1, 2017,  MagiCube has a magical ring to it, perhaps in reference to the sheer magic it will take to wipe out the raw filth and stench that mainly emanates from the feacal matter in Kenya’s informal settlements.

However, the nearly 2,000 slums dotting the country will not turn into paradise by the wave of a magic wand, it will take meticulous planning and action.

The Kenya Water Sector Trust Fund, the institution mandated to provide financial support to increased access to water and sanitation services for marginalised and underserved areas in the country, believes it has discovered the right mix that will bring transformation to Kenya’s low income areas.

The six faces of the cube represent the components that will lead to the desired outcome. They are: sector framework, implementing actors, information systems, financing, access to water, sanitation chain and with proper data for example, financing will be targeted, making the dream of improved hygienic conditions in slums a reality.

Stating that the MagiCube is the magic to upscaling water and sanitation services for the poor at the ongoing World Water Week 2017 in Stockholm, Sweden, CEO Ismail Shaiye said: “We already figured out the right ingredients to start solving the problem, what we need is more money, that’s why we are pitching to international donors.”

Since 2003, the fund has sunk a total of Ksh8.7 billion in over 2,300 investment projects reaching 4.1 million people in urban and rural Kenya.

But like many parts of Sub-Saharan Africa, the concerted efforts to extend water and sanitation services to the fast-growing numbers of people living in urban low-income areas appear to be stagnating.

Many challenges stand in the way of closing the last mile of physical access for an estimated four million Kenyans who live below the poverty line in the urban areas.

Where will the household take the waste water?

A misguided focus on conventional household connections for drinking water supply and an almost complete disregard of sanitation responsibilities at policy and operational level is one of the biggest challenges.

According to Alexander Dubois of GIZ, an implementing partner of the WSTF, water service providers do not seem aware that their work does not end with providing water to households, they should ask, “where will the household take the waste water?”

To address this gap, WSTF has began a marketing campaign for high quality toilets in the in informal settlements to improve sanitation at household and plot level.

Households or landlords receive a financial incentive covering part of the investment costs, after the toilet has been built according to standards. Emptying the toilets is the next important stage.

While this service may be available in various urban slums, the lack of treatment facilities turn the collected sludge into a health hazard.

The Water Fund has noted with concern that contracted water service providers often release untreated sludge into rivers or environment leading to water-borne disease outbreaks such as cholera.

The latest updates from the Ministry of Health report a total of 5,530 cases across the country since December, resulting in 112 deaths.

The highest number of cases are in Nairobi County, in the crowded and unhygienic informal settlements, and in western Kenya.

In a country where infectious diseases are a major health burden, the Water Services Regulatory Board CEO Engineer Robert Gakubia believes proper sanitation will lead to massive savings in the economy.

“We cannot afford to go on with poor sanitation, because it costs us so much”, he said.

On average, only 11 percent of Kenya’s urban population is connected to sewers; and these are limited to 15 towns serving approximately 1.3 million inhabitants.

This means that the remaining 89 percent rely on other types of sanitation, including pour flush with septic tanks or conservancy tanks, ventilated improved latrines and ordinary pit latrines.

It intends to reach another 400,000 people by 2018. This will require concerted efforts between the government, private sector and the donor community.

Saudi Arabia funded WSTF to the tune of Ksh500 millions channeled to 14 schools in each of the three North Eastern counties of Garissa, Wajir and Mandera as part of the water for every school initiative this financial year.

The Trust Fund’s CEO Musikari Kombo believes the political will to make the right to water and a clean environment for every Kenyan as dictated by the constitution, exists. He says President Uhuru Kenyatta’s decree that there will be water in every school by end of his tenure, means there will be a spill over to surrounding communities.

However, “political will is not just rhetoric,” said Gakubia, “it is action and commitment.

WSTF hopes that more counties will take up the Upscaling Basic Sanitation for the Urban Poor (UBSUB) programme in order to achieve goal six of the UN Sustainable Development Goals, which requires that water and sanitation services will be available to all citizens by the year 2030.