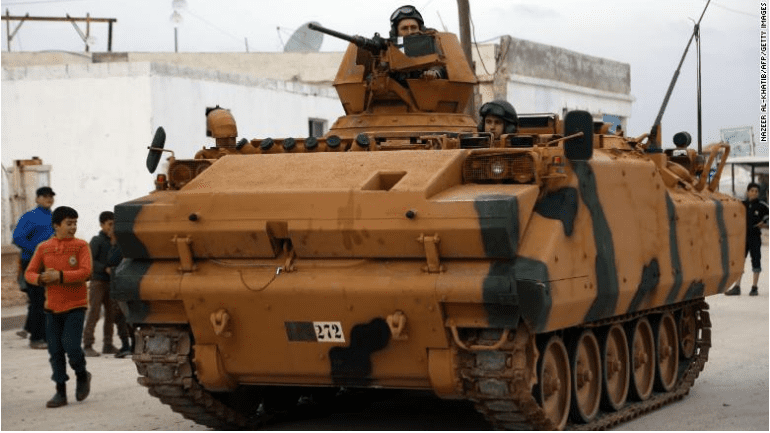 The US-led coalition fighting ISIS killed approximately 150 ISIS fighters in a Saturday airstrike, Col. Ryan Dillon, a spokesman for the coalition, told CNN Tuesday. The target of the strike was an “ISIS headquarters and command and control center,” Dillon said, adding that the strike involved “over a week’s worth” of intelligence work involving multiple kinds of coalition intelligence as well as information from US-backed Syrian Democratic Forces fighting ISIS on the ground. A statement from the coalition said that the location was “exclusively” occupied by ISIS fighters and was under constant surveillance, ruling out the possibility of civilian casualties. Dillon said the strike took place in the Syrian town of As Shafah, located in the Middle Euphrates River Valley, an area where remnants of ISIS continue to operate. A US military official said the strike was carried out by US Navy F/A-18 jets and unmanned drone aircraft. The aircraft carrier USS Theodore Roosevelt is currently operating in the Gulf in support of strikes against ISIS in Syria. “It looked like they were massing for a movement,” Dillon said noting that it was rare for ISIS fighters to gather in such a large group. “When they do congregate … like that we want to take advantage of it,” he added. “The strikes underscore our assertion that the fight to liberate Syria is far from over,” Maj. Gen. James Jarrard, the commander of the coalition’s Special Operations Joint Task Force in Syria, said in a statement following the strike. Jarrard added that coalition troops and members of the Syrian Democratic Forces “are still finding, targeting and killing ISIS terrorists intent on keeping their extremist hold on the region.” “We cannot take our focus off our mission, and we must not lose our momentum in taking these terrorists off the battlefield and preventing them from resurfacing somewhere else,” he added.

The strike and Jarrard’s statement of support for the Syrian Democratic Forces come as Turkey has launched its own military operation into Syria, targeting Kurdish YPG fighters in the Afrin area in northwest Syria.
The US does not back Kurdish fighters in Afrin but does back Kurdish elements of the Syrian Democratic Forces which operate in north eastern Syria. Turkey sees both groups as linked to Kurdish separatists that have fought a decade’s long insurgency against the Turkish government.

A top adviser to Turkish President Recep Tayyip Erdogan told CNN’s Christiane Amanpour Tuesday that Washington had assured Turkey it would only support Kurdish militias until ISIS was defeated, calling on the US to cease its support. US officials have stressed that ISIS remains a threat. A US military official told CNN that the Turkish operation in Afrin has had no impact on coalition operations against ISIS. The official added that the mix of US-backed fighters engaging ISIS in the terror group’s last holdouts in the Middle Euphrates River Valley was approximately 80% Arab and 20% Kurdish. The official also said that the approximately 57,000 strong Syrian Democratic Forces was now majority Arab, with about 52% of its fighters being Arab and 48% Kurdish. The official added that half a dozen foreign ISIS fighters had been captured trying to escape over the last 96 hours. He said those foreign fighters came from a variety of countries in the Middle East.