USAID yet to release consignment of ARV drugs to the government 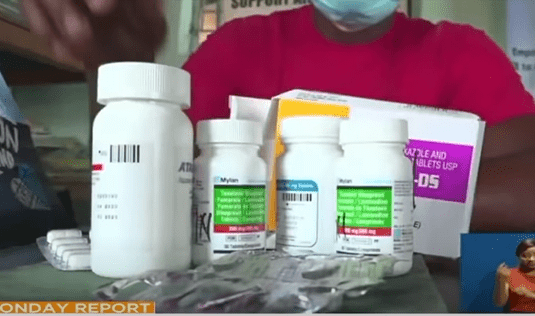 The United States Agency for International Development (USAID) is yet to release a large consignment of ARV medication to the government of Kenya, despite the clearance of the shipment from the port of Mombasa.

The Kenya Revenue Authority (KRA) has disclosed that there are still 13 containers of the consignment yet to be cleared at the port due to a lack of permits from the Pharmacy and Poisons Board (PPB).

As the tussle between the Ministry of Health and USAID continues, the greatest worry is the fact that the expiration dates for some of the medicaments is drawing near.

In a meeting with the National Assembly Health Committee regarding the push and pull, KRA stated that since January 2021, it has cleared 78*40 foot containers and 1*20 foot containers of medical supplies consigned to Chemonics.

Only 13 containers are lying at the Mombasa container terminal transit shed, pending customs clearance; these containers, which arrived between February 5 and March 5, include HIV self-testing kits and various HIV medication.

“The 78 were provisionally cleared by KRA because we had permits from Pharmacy and Poisons Board, the other 13 do not have permits,” said Lilian Nyawanda – Commissioner, Customs and Border Control.

Despite the 78 containers being cleared by February this year, the ARVs are yet to find their way to at least 1.2 million Kenyans living with HIV/AIDS who desperately need them.

“Those containers that were cleared, the ones cleared provisionally are at Bollore, we do not know why they were not delivered to KEMSA but that is something the Ministry of Health can respond to. Bollore is on Mombasa road and the consignee of these consignments is the United States Embassy and UNODC,” stated Joseph Kaguru – Commissioner, KRA.

In a letter to the United States Embassy from the Ministry of Health dated 19th April, the ministry says, “we have been informed of the condition precedent, that is, the release of the already cleared antiretroviral drugs shall be subject to the government of Kenya accepting to contract Chemonics.”

The ministry pointing out that was a new development contrary to assurances presented by PEPFAR in a 14th April meeting that involved communities of people living with HIV/AIDS, promising immediate distribution of the ARVs upon clearance.

Allegations and evidence of criminal nature and details of a USAID-led investigation into KEMSA have been refuted by the ministry. So is the ministry’s stand regarding an evaluation report on the KEMSA medical commodities project conducted by USAID between November and December 2020.

Ksh.113 million in taxes is what KRA has calculated in costs for clearing of the remaining 13 containers, despite the government undertaking to pay Ksh.45.8 million in taxes.

But when exactly will this tussle end? Will the newly formed KEMSA board instill confidence in the medical supplier and perhaps fast-track the process? Until then, the tussle for ARVs continues.