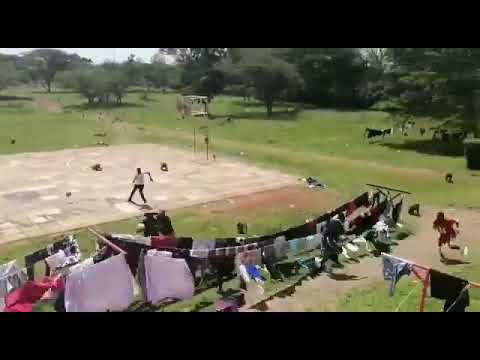 Multimedia University students were a scared lot this week after a group of baboons chased them off their basketball pitch.

A video doing rounds on social media shows the students tossing balls up and down the court only to run off in a huff after the animals charged towards them.

This is not the first time that the wild animals have interrupted students’ activities.

According to Mitchelle, the animals are only seen when the university is in session; during the holidays, they are nowhere to be found.

Other wild animals such as warthogs also frequent the Karen campus that is adjacent to the Nairobi National Park.

The African Wildlife Foundation says baboons sleep, travel, feed, and socialize in groups averaging of about 50.

They are described as opportunistic eaters who feed on just about anything edible including grass, meat, fish, hares, birds, vervet monkeys and small antelopes.

However, they are losing their habitats due to overgrazing, agricultural expansion, irrigation projects and overall human settlement.

“Baboons are often intentionally poisoned and killed because they tend to be considered as a pest species,” AWF says.

I went to Multimedia University on Thursday and for a split second got utterly shocked to bump into WARTHOGS within the school compound. Are they domesticated? Baboons too.

In the past, students have pleaded for the relevant agencies to deal with baboon menace with the latest incident, though comical, raising concern over their safety.