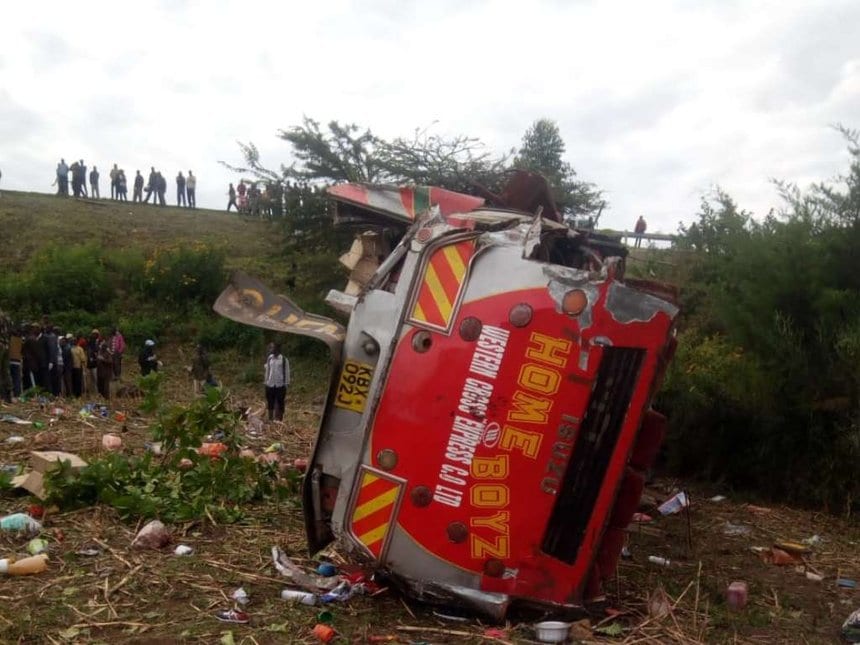 A survivor of the road tragedy that claimed the lives of 55 people at Fort Ternan area in Kericho blames the bus operators for the horrific accident.

Speaking from his hospital bed at Fort Ternan dispensary in Kericho, the middle-aged man says the bus known as Home Boyz and operated by the Western Cross Express Sacco was overloaded and the driver ignored pleas by the passengers to stop speeding.

The man, who was travelling to his rural home in Vihiga, says the Kakamega bound-bus left Nairobi at around 11.30pm on Tuesday but, upon reaching Westlands area in Nairobi, it made a u-turn back to the city centre and was overloaded with passengers.

The survivor says when he inquired from the conductor why they were going back to the city, he was told that the bus had to pick some passengers who were stranded.

“Those passengers had boarded another vehicle which was almost full. So I wondered why they were being transferred into our bus which had only few empty seats. The remaining seats got filled but more passengers were squeezed into the bus and some of them were even standing,” said the man.

“We complained but nothing was done the bus got onto the road and the journey continued at around midnight.”

After they passed Naivasha, the man says the driver began speeding and hitting potholes, with utter disregard of the passengers discomfort and oblivious of the risk he was posing to the tens of passengers.

“The driver did not care about bumps, he kept on speeding and after a while the bus started swerving from side to side,” he added. “This is when we realized that we were in danger.”

Shortly later, the man says, screams and screeching sounds rent the air and what followed was a horrific scene of scattered bodies and a mangled bus with no roof.

The bus veered off the road, tore through a guard rail, and rolled several times killing at least 40 people on the spot.

More victims who had sustained serious injuries passed on while undergoing emergency treatment at various hospitals around Kericho. By Wednesday evening, the death toll was 55 with sources indicating some of the survivors were in critical condition.

Inspector General of Police Joseph Boinnet has since announced that action will be taken against the owner and sacco of the bus.

According to the National Transport and Safety Authority (NTSA), the bus was not licensed to operate at night.