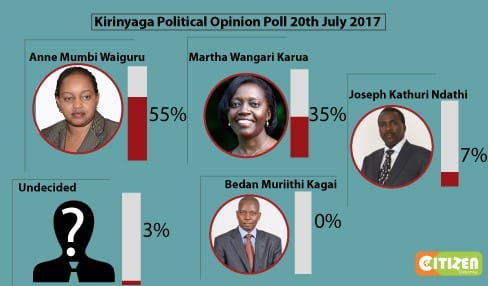 According to a recent poll by Trends and Insights for Africa (TIFA), Waiguru enjoys a 20 percentage points difference with her closest challenger, Martha Karua of Narc Kenya.

Waiguru leads with 55% with Karua coming second with 35%. Another 7% of the voters remain undecided with 3%saying they would vote for the incumbent, Joseph Ndathi, while independent candidate Bedan Muriithi Kagai has a popularity score of 0%.

The pollster indicates that if Waiguru and Karua get 1% of the undecided voters each, the former Devolution and Planning Cabinet Secretary’s popularity score would go to 56% against Karua’s 36%.

The poll was conducted between July 14 and July 17 from a sample of 556 respondents residing in all wards in Kirinyaga County.

53% of the respondents, who are voting against Waiguru, cite the infamous embezzlement of funds at the National Youth Service (NYS) during her tenure as Devolution and Planning CS as a reason for opting against voting for her while 20% of the respondents voting against Karua highlight her poor development as a Cabinet Minister serving in different portfolios during former President Mwai Kibaki’s tenure in the helm.

According to the poll, Jubilee remains the most popular party in the region with 95% of the respondents saying they feel closest to the ruling party, 2% identify with Nark Kenya while 3% are undecided.

If the elections were to be held today, 93% of the respondents would vote for President Uhuru Kenyatta, 1% would vote for National Super Alliance Presidential candidate Raila Odinga while 6% of the voters remain undecided.

The poll comes one month after President Kenyatta’s visit of the vote rich county where he failed to endorse either of the two front-runners saying that he will let Kirinyaga residents vote for the leader of their choice.

“Both of them are supporting my re-election bid and you are the ones to decide the leader that you want.” President Kenyatta said.

Waiguru, a technocrat by trade at the time insisted that the President must support Jubilee candidates and dismissed the former Justice Minister as a ‘nonstarter’ while Karua insists that her integrity will appeal to voters on August 8.