Waiguru wants Kabura to reveal the ‘mastermind’ of NYS scandal 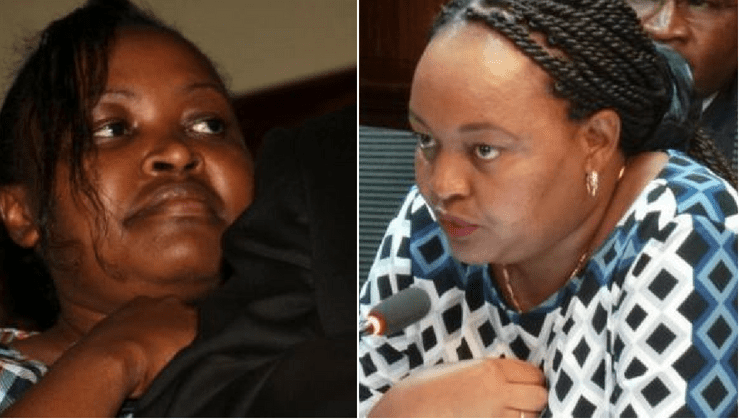 This is after the Ethics and Anti-Corruption Commission (EACC) wrote to the Director of Public Prosecutions Noordin Haji informing him that the affidavit sworn by Kabura on the NYS scandal has no evidence backing it.

Kabura filed an explosive affidavit in February 2016, accusing Waiguru and other senior government officials of masterminding the alleged theft of Ksh.791 million from NYS through questionable tenders.

“EACC together with Directorate of Criminal Investigations conducted investigations and established that the allegations made against the suspects were bereft of truth, were denied in totality and there was no evidence to support the same,” said EACC in a Gazette notice published last Friday.

On June 12, 2018 the anti-graft body forwarded a report to the DPP recommending that Kabura be charged with the offence of knowingly misleading a person contrary to the law.

The DPP, however, wrote back to EACC recommending further investigations before charging Kabura over the disputed affidavit.

Responding to the DPP’s recommendation for further investigations, Waiguru said the probe should unravel who Kabura was working for and where she took the money she claimed to have carried in sacks.

“This is progress. However I agree with with the DPP that there should be further investigations. If both EACC and DCI have established Kabura was lying – who then was she working for? Where did she take the money in the sacks? Whose agent was she? The mastermind should be charged too,” said Waiguru.

In August this year, Waiguru had written to EACC CEO Halaqhe Waqo demanding that the anti-corruption agency make public findings of investigations into Kabura’s affidavit.

While EACC cleared Waiguru of any wrongdoing in the NYS scandal, she says allegations stemming from Kabura’s affidavit have continued to cause her negative publicity.