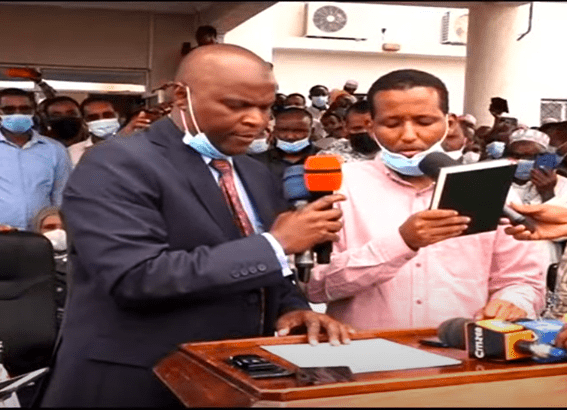 Wajir Deputy Governor Ahmed Ali Muktar has been sworn in as the Governor for Wajir County following the Senate’s move to uphold the impeachment of Mohamed Abdi Mohamud.

Muktar was sworn in Tuesday midday at the Wajir County headqurters by Justice Said Chitembwe after the gazettement of Mohamud’s impeachment by Senate Speaker Ken Lusaka.

He becomes the  third governor of Wajir County.

The former Wajir Governor Mohamed Abdi Mohamud was impeached on grounds of Gross violation of the Constitution of Kenya, 2010; the County
Government Act, 2012; the Public Procurement and Disposal Act, 2015; and the Public Finance Management Act, 2012.

“PURSUANT to section 33 (6) (b) of the County Government Act,2012 and Standing Order 75 of the Senate Standing Orders, the Senate, after according Mohamed Abdi Mohamud, the Governor of Wajir County, an opportunity to be heard, did on Monday, 17th May, 2021, resolve to impeach Mohamed Abdi Mohamud, the Governor of Wajir County on the following ground; namely— Gross violation of the Constitution of Kenya, 2010; the County Government Act, 2012; the Public Procurement and Disposal Act, 2015; and the Public Finance Management Act, 2012,” reads the Gazette Notice dated May 17, 2021.

Mohamud’s impeachment trial was held by an 11-member Committee which submitted to the Senate an 144-page report recommending his removal.

The Wajir County Assembly alleged that the governor “had caused the health sector to run into disarray that had compromised right to the highest attainable health standards; and also that, “over Ksh.2.4 billion had been allocated to the department of medical service but the county referral hospital lab could not conduct COVID-19 tests due to faulty test kits and lack of reagents. ”

In his defense, the governor denied that healthcare in Wajir had suffered under his leadership adding that the allegations levelled against him do not meet the threshold of impeachment.

The Wajir governor is the 9th county boss to face impeachment since the promulgation of the new constitution with two of his colleagues namely Mike Sonko and Ferdinand Waititu removed from office for gross misconduct.