We are winning the war against corruption, declares Uhuru 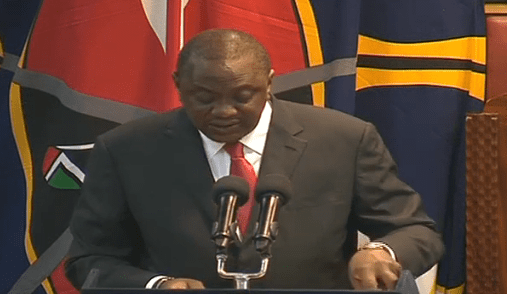 President Uhuru Kenyatta has exuded confidence that his administration will win the war against corruption despite  increasing concerns that the ongoing graft purge is more of empty rhetoric than concrete action.

Speaking during the State-of-the-Nation Address on Thursday, President Kenyatta outlined his administration’s scorecard in the fight against corruption, noting that unlike previous administrations, it was under his leadership that presumed untouchables had been targeted.

He strongly asserted that there would be “no turning back, no compromises or sacred cows” in the ongoing graft purge.

“There will be no turning back in the War against Corruption and Impunity. There will be no sacred cows, no compromise. The fight against corruption is a fight for the soul of our nation,” he said.

“This is one war, Ladies and Gentlemen, I am certain we will win.”

The Head of State noted that seven current and former Governors and over 30 Chief Executive Officers of State Corporations are under active investigation or prosecution for various corruption related offences.

He further pointed out that the government has recovered assets worth Ksh.2.5 billion and is currently pursuing property estimated to be worth Ksh.7.5 billion.

“In the reporting period, the Asset Recovery Agency has investigated 20 cases and preserved assets worth Ksh.1.1 billion. Assets worth Ksh.72 million were forfeited to the government. Further, recovery proceedings of corruptly acquired property valued at Ksh.7.5 billion were instituted.

The President described the ongoing fight against corruption as a “just war” meant to prevent “misuse of public resources for selfish interests by those we have entrusted to manage them.”

He said moving forward, the government will put more focus on asset recovery in addition to jailing and imposing fines on those who have looted public coffers.