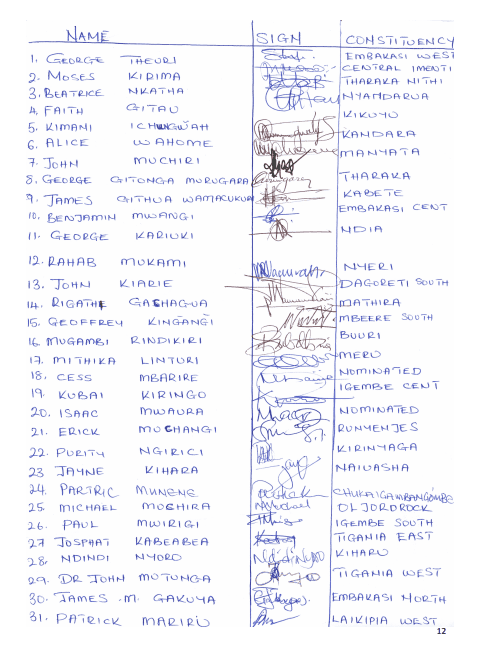 Fourty-one legislators from 11 counties of the larger Mt. Kenya region have accused President Uhuru Kenyatta of mismanaging his administration especially in the second term leading to a dysfunctional government whose political direction appears divisive.

The MPs accusations come in the form of an eleven-page letter to the President, in which they complain they have not been invited to the Sagana meeting this weekend, attributing the letter to this exclusion.

They accuse the President of betraying them and trying to impose Mr. Odinga on the Mt. Kenya region. The leaders, who have been left out of the Sagana retreat, have boldly declared: “We cannot sell Raila Odinga in our region.”

“For 8 years, between 2011 and 2018, you consistently and persistently cautioned us that Raila Odinga was Kenya’s foremost problem, and pleaded with us to send him home for the country to move forward. You were only emphasizing what our people already knew, taking into account his history in the use of violence and ethnic divisions as a means to achieve political power,” reads part of the letter.

“As a result, he is an existential threat to the economy and national unity. We must be direct and truthful with you: We cannot sell Raila Odinga in our region or, indeed, any other imposed presidential candidate. You blame the leaders and people of the Mt. Kenya region for being reluctant to accept the Handshake and the BBI. It is not their fault. The successful effort you made to persuade the people and render Raila Odinga unacceptable in Mt. Kenya cannot be undone in your lifetime.”

On the BBI issue, the Mt. Kenya leaders maintain that the handshake was a departure from the Jubilee’s main focus; the Big 4 Agenda, which they insist would have created jobs and  transformed livelihoods.

“Despite your administration promising to focus on the Big Four agenda post-2017, agenda that would have created millions of jobs for our youth (jeshi), the self-same jeshi now languish in poverty after the Big Four agenda was abandoned in favour of the Small Two Agenda of the Handshake and BBI,” the letter further reads.

The leaders have further highlighted what they term as politics of deceit and betrayal within the President’s camp stating: “The new political agenda propounded by a faction publicly allied to you, which seeks to normalize treachery, dishonesty, deceit and betrayal as defining traits of our region and people is tragic, dangerous and unacceptable.”

They also want the Head of State to withdraw remarks he made at the burial of ANC Party leader Musalia Mudavadi’s mother in Mululu where he insinuated that it was time for other communities to lead the country other than the two that have dominated the Presidency.

“We watched in disbelief as you declared that inclusivity will be achieved by banning two communities from fielding presidential aspirants because previous leaders have hailed from those communities… To insinuate that Kikuyus should not aspire for the Presidency, because others have been President, is unfortunate, insulting and selfish. We call on you to use this meeting to reflect and withdraw these unfortunate and ill-considered utterances,” adds the letter.

On matters development, the Mt. Kenya leaders have asked the Head of State to turn his focus on “the declining economy, ailing health sector and deal with the elephant in the room of the crippling public debt.”

On the ongoing succession politics, the leaders have advised President Kenyatta “not to interfere with the people’s freedom and democratic right to choose his successor,” which they say was a strategy used by Retired President Mwai Kibaki.

“A number of us had the good fortune to serve when Hon Kibaki was President. Owing to pressure of work, leaders could not access him often. However, accessible, credible and effective agents had been designated to consider and address any pressing issues the people of Mt. Kenya raised through their leaders. Hon. John Michuki, Hon. Njenga Karume, Mr. Francis Muthaura, Mr. J. B Wanjui and Mr. Stanley Murage were trusted lieutenants with capability to represent the President effectively in any forum,” reads the letter.

“We would NOT have written this letter to you if such leaders existed in your government. We have strong doubts that David Murathe and Francis Atwoli are persons of the calibre we have in mind.”

The 41 politicians want President Uhuru Kenyatta to address their grievances at Sagana retreat, warning that should he fail to do so, the Mt Kenya region “will remain restless, dissatisfied, and defiant” and that “ultimately, full-blown revolt will be inevitable.”

Here is the list of the 41 leaders who signed the letter: 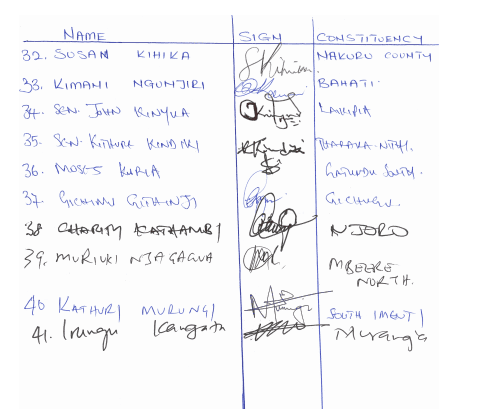