We won’t force the referendum on you, Raila tells Kenyans 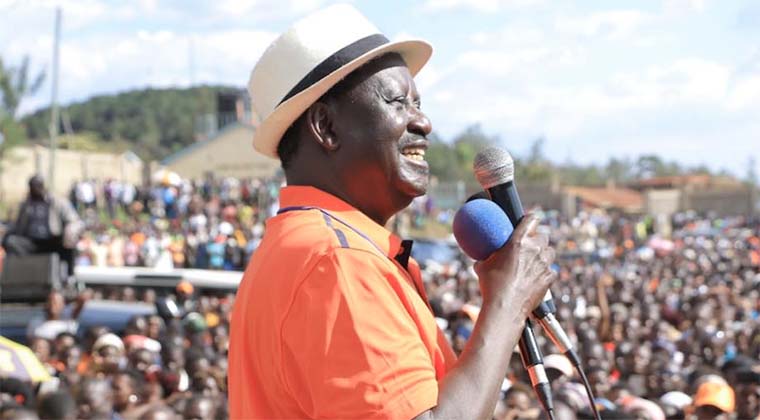 NASA leader Raila Odinga has assured Kenyans that they will not force a referendum on them as perceived by a section of leaders in this country.

He says that the referendum will only be conducted with the consent of the Kenyan people.

Odinga added that the 14 member team Building Bridges team would soon start going round the country to collect people’s views on issues affecting the country.

Mr. Odinga said that it is only after this process that a referendum can be called should Kenyans propose changes to the constitution.

The ODM party leader was speaking at Opoda village in Bondo constituency during the burial of Mzee John Odongo Langi.

He told off opposers saying should Kenyans consent to it, the referendum will be held whether they like it or not.

Odinga further defended himself against criticism from those who castigated him over the move to support President Uhuru Kenyatta’s 8percent tax on fuel products.

According to him, with a Ksh.70billion deficit in the 2018/2019 national budget, the Kenyan economy was going grind to a halt.

The NASA leader has however reiterated that the President was given one year to seal corruption loopholes and ensure that stolen money stashed in foreign banks is recovered.

He added that the government both at the national and county levels must also reduce wastage of public funds.

Odinga also maintained that unnecessary trips in the name of benchmarking must be abolished.