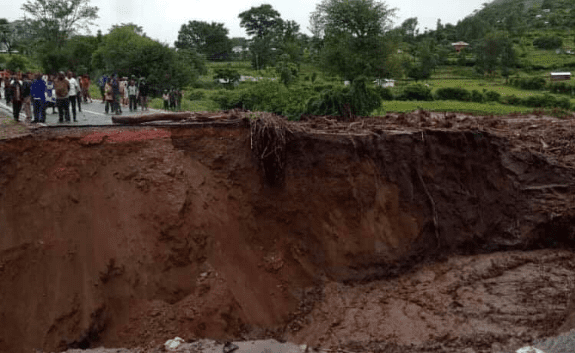 Natembeya told Citizen TV that 25 bodies had been recovered while a search was ongoing for 13 others.

However, West Pokot Governor John Lonyangapuo had earlier indicated that the death toll from the incident has risen to 43.

Several agencies led by the Ministry of Interior, Kenya Red Cross and the West Pokot County Government are leading the recovery exercise, with the bodies being moved to the Kapenguria Referral Hospital mortuary.

The 38 from Tapach and Parua in Pokot South, and from Tamkal in Pokot Central, were buried alive after a night of heavy downpour early Saturday morning.

At the scene of the tragic incident, shoes and clothing believed to be of locals who were trying to save their lives were scattered everywhere.

Some of the recovered bodies had been swept as far as seven kilometres downstream.

Transport between Kitale and Lodwar is still paralyzed for the second day at the Sebit bridge that was cut off. Traffic flow in the county has also been affected with major roads cut off.

The landslides occurred at Nyarkulian, Parua in Pokot South and Muino in Tamkal in Pokot Central.

Some of the patients include William Lokapel, a local resident, who lost three children in the incident and whose bodies have since been moved to the Kapenguria Hospital morgue.

Mr. Lokapel’s wife and one other child survived the incident but they were unable to rescue the other three children.

The county government has since set up counseling centres in all areas that were affected by the landslide.

In a statement to newsrooms, Interior Cabinet Secretary Fred Matiang’i on Saturday indicated that military and police choppers have already been deployed to scale up responses to the tragedy.

“ The Government has deployed Military and Police Choppers to scale up responses and respond to immediate needs of affected families. While rescue and recovery efforts remain the priority, a full assessment into the extent of damage caused continues to be a challenge due to harsh weather conditions,” read the statement.

The interior CS however noted that while rescue and recovery efforts remain the priority, the harsh weather conditions are hampering their operations.