Wetangula hits back after ODM labelled him a ‘coward’ 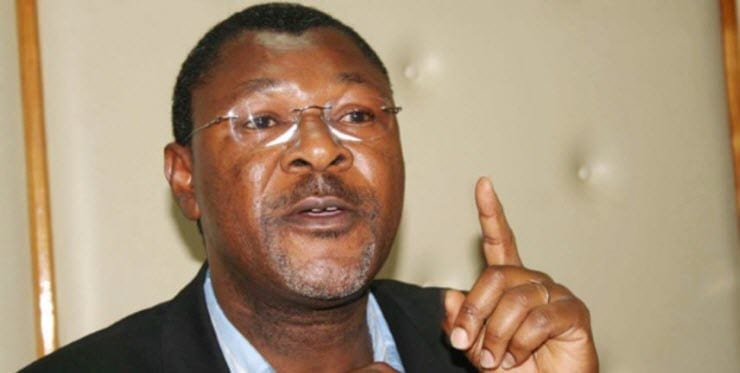 FORD-Kenya Party Leader Moses Wetangula on Wednesday hit back at the Orange Democratic Movement (ODM) which called him a coward for claiming that the NASA coalition was ‘dead’.

Expressing his outrage via Twitter, Wetangula, who recently announced that FORD-Kenya had pulled out of NASA, accused ODM leader Raila Odinga of tribalism and using his party members to attack him.

“Instead of responding to issues of appointments from his tribe, the ODM leader is using upstart surrogates to hurl abuses at Wetangula. Very unhelpful,” the tweet reads.

The Bungoma Senator claimed that ODM Party had abandoned its opposition role following the unity deal between President Uhuru Kenyatta and Mr. Odinga.

“Having abandoned its opposition role, ODM turns its guns on its partners, Despicable! Shame! Let the inanity reign like the tower of Babel,” reads another tweet by Wetangula.

On Monday, Mr. Wetangula termed the NASA coalition as a ‘history’, adding that Mr. Odinga had betrayed the coalition and its supporters by abandoning the NASA course to forge a unity pact with President Uhuru Kenyatta.

“In my view, NASA is now a moribund organization. NASA is history. We were in NASA as FORD-Kenya in a coalition of the willing, we suffered a massive betrayal by our presidential candidate and as a party we are now focused on how to strengthen our grassroots support and to strengthen our national appeal,” said the Bungoma Senator, who was a NASA co-principal.

Wetangula’s sentiments angered ODM Party members with Secretary General Edwin Sifuna coming out to criticize the FORD-Kenya Party leader, whom he accused of being dishonest and a coward.

According to Sifuna, FORD-Kenya should relinquish the parliamentary seats handed to its members through the NASA agreement, if Wetangula stands by his words that the coalition is dead.

“He has time and again said Nasa is dead but why doesn’t he send his official communication to the Registrar of Political Parties? What we know is that Nasa died after the January 30 swearing-in when the cowards could not turn up for the occasion,” Sifuna said in an interview with the Nation.

However, in his series of tweets, Wetangula was unapologetic for his remarks on NASA being dead.

“Those perpetuating dynastic leadership think everybody owes them. Bindu bichenjanga! Nothing lasts forever. God is watching over all of us,” Wetangula’s final tweet read.

Mr. Odinga and President Kenyatta would later sign a peace deal that was symbolised by a much-publicised handshake on March 9 this year, with the NASA co-principals denouncing the agreement, claiming they had been sidelined.