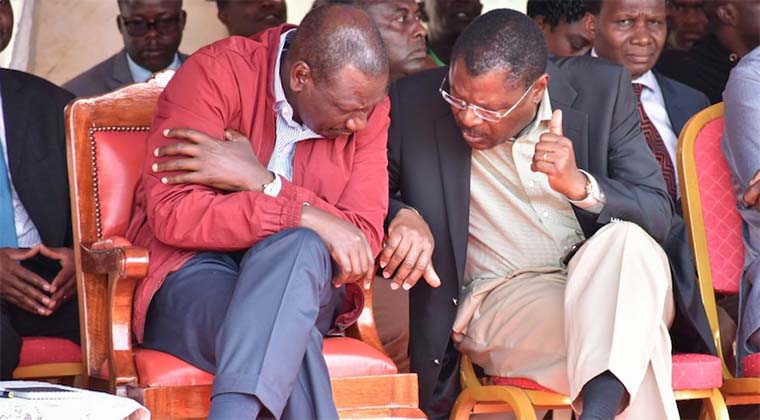 Leaders from Western Kenya have said they are opposed to calls for a referendum to amend the Constitution that will create more positions for some individuals.

Led by Bungoma Senator Moses Wetangula, the leaders said they will not support a referendum for “self-resurrection of some leaders”.

Speaking at Terem Primary School and Butonge High School grounds in Bungoma County on Friday after the commissioning of Terem-Chwele-Nalondo Water Supply Project, the leaders said they will not support any efforts to amend the Constitution to create more positions.

The commissioning of the water project, that was funded at a cost of Sh500 million by the government of South Korea and Kenya, was presided over Deputy President William Ruto.

“We will not allow the Constitution to be amended for self-resurrection. We want change to be for the people and not for those leaders who want to revive resurrect politically,” said Mr Wetangula.

Bungoma County Governor Wycliffe Wangamati said they were ready to support a referendum, but not on grounds of creating positions or reducing the number of counties.

Kimilili MP Chris Wamalwa said a parliamentary initiative or a popular vote should be used to carry out audit on the current Constitution to establish where changes should be made.

“But we will not allow some people to take advantage of calls for a referendum to amend the Constitution to get positions through the back-door. We will not allow that,” said Mr Wamalwa.

Mr Wamalwa , however, said the timing of calls for a referendum to amend the Constitution was suspect as it was aimed at blocking the Deputy President from ascending to the presidency in 2022.

“Why is it that when it is about to be the turn of the Deputy President to take over from President Uhuru Kenyatta when his term comes to an end in 2022, we start calling for change of the Constitution?’  Asked Mr Wamalwa.

He said Mr Ruto would get support from Kenyans because he has demonstrated that he can deliver.

“I am sure Kenyans will support their fellow “hustler” because he has demonstrated that he has what it takes to take the country to the next level of prosperity,” said MP Wamalwa.

He added that the Luhya community with the biggest voting bloc should support Mr Ruto in 2022 “so that we become part of the next government.”

The MPs urged Mr Wetangula and the Ford-Kenya leadership to consider supporting the Deputy President for the presidency seat in 2022.

Mr Wetangula said he was ready to work with Mr Ruto on matters of politics when the time comes.

“Right now, we are working together with the Deputy President on matters of development because time for elections is over. But when the time comes, we will work together on matters of politics,” said Mr Wetangula.

The Deputy President said leaders should forget their political differences and take a common stand on matters of development.

“We don’t want politics based on tribalism and division. We should now focus our energies on matters of development because time for political competition is over,” said Mr Ruto.

The Deputy President said he would continue to work with western leaders including Mr Wetangula in addressing challenges facing people in the region.

“I am ready to work with Mr Wetangula on matters of development but when time for politics comes, we will know what to do,” said Mr Ruto.