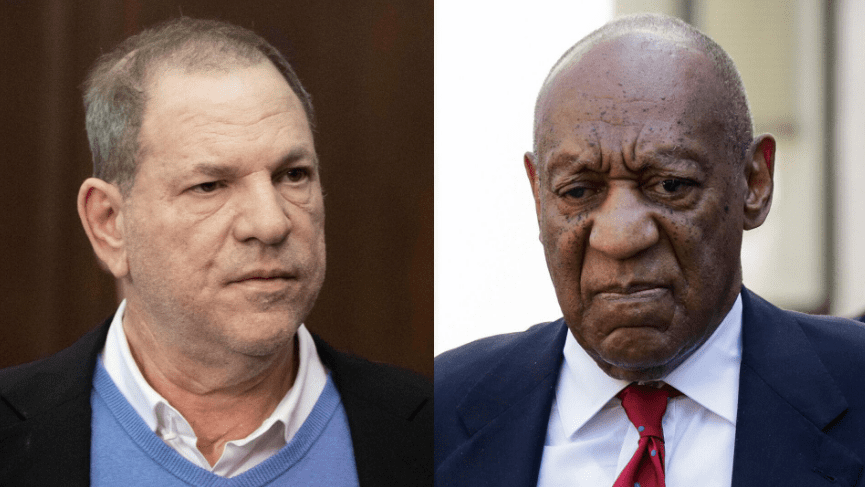 Since Bill Cosby walked out of prison a free man after a court overturned his sexual assault conviction, observers have found themselves wondering: Could Harvey Weinstein be next?

The Supreme Court of Pennsylvania tossed out Cosby’s conviction Wednesday, three years after he was imprisoned for assaulting a Temple University employee. In the #MeToo era his case has often been compared to that of Weinstein, who is serving a 23-year prison sentence in upstate New York for sexual assault and rape.

Both men were powerful Hollywood figures accused of exploiting their fame and influence to sexually assault dozens of women. Both their trials featured accusers who testified about “prior bad acts” — other sex crimes beyond the ones Cosby and Weinstein were charged with — to show the two men had a pattern of predatory behavior.

And attorneys for Weinstein, like those for Cosby, have filed an appeal asking his convictions be thrown out.

So what does the Cosby decision mean for Weinstein’s case? Here’s what legal experts say.

Weinstein’s reps say they are encouraged by the Cosby ruling

Cosby was sentenced to three to 10 years in a Pennsylvania prison for drugging and sexually assaulting Andrea Constand at his home nearly two decades ago.

“In reversing the conviction of Bill Cosby, the Pennsylvania Supreme Court has demonstrated, once again, that no matter who a defendant may be and no matter the nature of the alleged crime, courts can be relied upon to follow the law and come to the correct decision,” said Juda Engelmayer, a spokesperson for Weinstein, in a statement.

“This decision also reaffirms our confidence that the Appellate Division in New York will reach the similarly correct decision in Harvey Weinstein’s appeal, considering the abundance of issues that cry out for a reversal.”

One of Weinstein’s lawyers, Duncan Levin, also applauded the overturning of Cosby’s conviction, citing the “prior bad acts” accusers.

“Vague evidence about uncharged conduct has no place in a courtroom,” Levin told CNN.

“There is nothing more important to our system of justice than the presumption of innocence,” he added. “The rules of evidence exist so that testimony never turns into unfounded attacks on a defendant’s character, and that appears to be exactly what happened here.”

The two men’s legal appeals have some similarities — and differences

In Cosby’s case, his attorneys appealed his conviction on two issues: The “prior bad acts” witnesses who testified about alleged assaults that were not part of the charges, and an agreement between Cosby and a prior prosecutor.

In overturning Cosby’s conviction, Pennsylvania’s highest court cited an agreement Cosby had with a prior prosecutor a decade before that prevented him from criminal charges in the case if he sat down for a civil deposition. That evidence was ultimately used against him in his criminal trial, violating Cosby’s due process rights, the state high court ruled.

The Pennsylvania court’s decision didn’t focus on the merits of the “prior bad acts” evidence, said Randy Zelin, a professor at Cornell Law School and former defense attorney in New York.

“The basis for the Pennsylvania Supreme Court’s decision was that Cosby had a binding and enforceable non-prosecution agreement. He should have never been prosecuted,” Zelin said. “Weinstein has never claimed to have such an agreement.”

Like Cosby’s, Weinstein’s appeal maintains jurors shouldn’t have been allowed to hear from “prior bad acts” witnesses who testified against him. His attorneys also argue that his trial was tainted on several levels, including a biased judge and juror.

During trial proceedings in early 2020 attorneys for Weinstein repeatedly pursued legal avenues for a mistrial, including claims that the judge showed hostility towards Weinstein. Weinstein’s lawyers had asked Justice James Burke to recuse himself after the judge threatened Weinstein with jail time for repeatedly using a cell phone in court.

Weinstein’s appeal also claims a seated juror violated the movie mogul’s right to a fair and impartial jury. Weinstein’s attorneys argued Juror No. 11 was biased against Weinstein because she was not forthcoming during jury selection about writing a partly autobiographical novel about “predatory” older men and their relationships with younger women.

So could the Cosby ruling affect Weinstein’s appeal?

“There’s no interesting takeaway message from Cosby’s case as it relates to either Weinstein or the #MeToo movement,” Dempsey said.

She said Cosby’s conviction was overturned because of one specific aspect of the case — Cosby waiving his right against self-incrimination and testifying in a previous civil case, believing he had been granted immunity.

“It’s based on that … extremely unusual fact,” Dempsey said. “It’s the kind of case that law schools will study and teach about for years.”

Dempsey said the Cosby ruling had nothing to do with the evidence against him and should not be construed as supporting his claims of innocence.

“It does not change the credibility of Andrea Constand and other victims of sexual abuse,” she said. “I don’t think the case should be understood as having any other implications to other cases. And it’s not relevant to Weinstein’s litigation.”

Zelin, the Cornell law professor, said Weinstein also is not helped by the fact that Cosby’s case occurred in Pennsylvania, not New York.

Even if Weinstein’s lawyers are successful on appeal in New York, his legal troubles would not be over.

A judge in New York has approved Weinstein’s extradition to California, as early as this month, to face those additional charges.