What happened to JKUAT student Allan Omondi after assault? 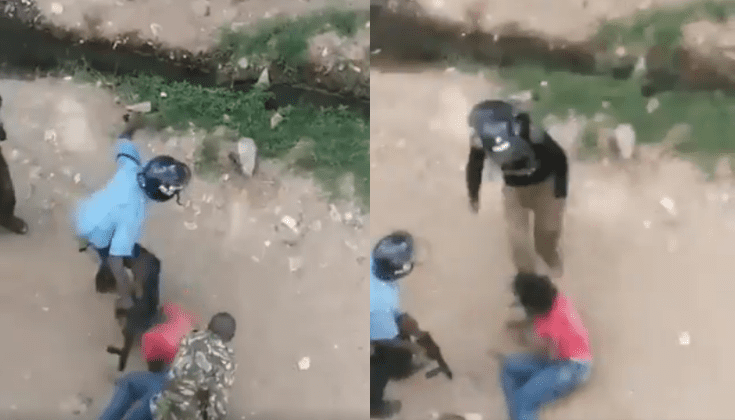 A student in one of the videos showing police officers using brutal force at Jomo Kenyatta University of Agriculture and Technology (JKUAT) has been identified as Allan Omondi.

Citizen Digital established that he is a Food Science and Technology student in his 4th year.

He and his fellow students had taken to the streets on Monday to protest over insecurity at the institution when officers reportedly cornered him.

The video shows them kicking him on the head and using their batons to hit other parts of his body.

Reports indicate that he was later arrested and taken into custody at Juja Police Station.

As late as 9:30pm, the student was still locked up forcing his mother to camp at the station pleading for her son’s release.

The OCPD Dorothy Migarusha told Citizen Digital: “There is a procedure which those arrested while injured undergo but huyo kijana ako sawa.”

Police IG Hillary Mutyambai had ordered that all students who had been arrested be released.

However, it was not until 10:30pm that it was confirmed that Allan Omondi was out of police custody.

On Tuesday, a close friend who sought anonymity said Omondi had been taken to Nairobi Hospital and is now recuperating at home.

Interior CS Fred Matiang’i has since condemned the incident and ordered that action be taken on the culprits within 24 hours.

The Independent Policing Oversight Authority (IPOA) said they have launched investigations even as human rights organizations condemned the incident.

Amnesty International CEO Irungu Houghton said: “Violent policing during public demonstration must stop.It is impossible for the Republic to distinguish hooligans both in and out of police uniforms.Officers who break their code of office must be held individually guilty of misconduct, sanctioned and made to compensate victims.”