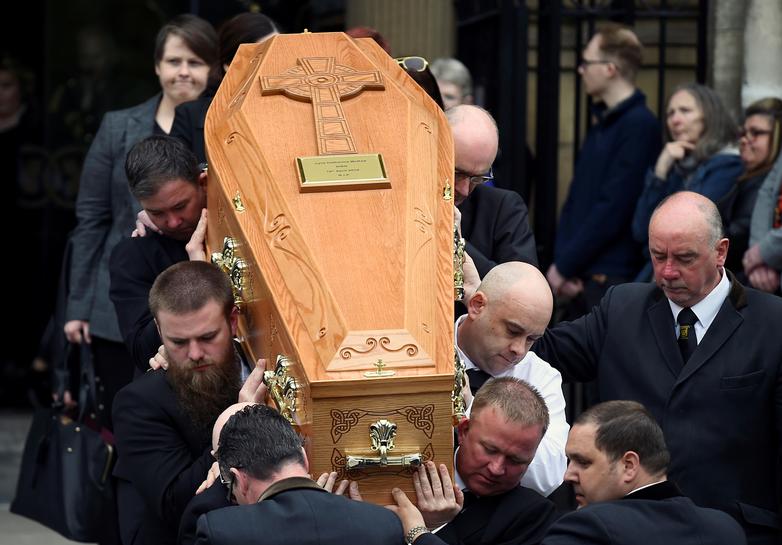 The leaders of Britain and Ireland joined hundreds of mourners on Wednesday at the funeral of journalist Lyra McKee whose killing by an Irish nationalist militant during a riot has sparked outrage in the province.

Leaders from across Northern Ireland’s political divide sat side by side along with British Prime Minister Theresa May, Irish Prime Minister Leo Varadkar and senior members of his government as McKee was remembered in her native Belfast as a “talented and fearless young woman” who broke down barriers.

The New IRA group, which opposes Northern Ireland’s 1998 peace accord, has said one of its members shot 29-year-old McKee dead in Londonderry on Thursday when opening fire on police officers during a riot McKee was watching. The group has not identified the shooter.

“In death Lyra has united people of many different backgrounds,” Roman Catholic Father Martin Magill told the multi-cultural, cross-community service, pleading with those behind her murder to take the road of non violence.

“I ask you to listen to the majority of the people on your beloved island of Ireland who are calling on you to stop.”

The killing, which followed a large car bomb in Londonderry in January that police also blamed on the New IRA, has raised fears that small marginalized militant groups are exploiting a two-year political vacuum in the province and tensions caused by Britain’s decision to leave the European Union.

“Why in God’s name does it take the death of a 29-year-old woman with her whole life in front of her to get us to this point?” Magill said, addressing the politicians with a challenge that received a spontaneous standing ovation in the church.

The 1998 peace agreement ended nearly three decades of “The Troubles” — hostilities between mainly Protestant supporters of continued British rule of the province and mainly Catholic proponents of unification with the Irish Republic.

The agreement requires politicians from Northern Ireland’s rival communities to share power, but that arrangement broke down two years ago leaving no executive in place. It also requires an open border, which has become a central issue in Britain’s polarizing negotiations to leave the EU.

McKee’s family described the writer and lesbian and gay rights activist as a smart, strong-minded woman who believed passionately in justice, inclusivity and truth, and would not wish ill on anyone.

“Lyra’s answer would have been simple, the only way to overcome hatred and intolerance is with love, understanding and kindness,” they said in a statement issued ahead of the funeral.

A close friend, Stephen Lusty, told mourners that McKee had intended to propose next month to her partner, Sara Canning, who encouraged friends to wear Harry Potter and Marvel Comic themed clothes to the service in tribute to Lyra’s love of both.

Members of the National Union of Journalists formed a guard of honor as the coffin left St Anne’s Cathedral. Among the congregation, a Belfast-born nun who traveled from Dublin for the service wore a rainbow scarf around her neck.

“I was brought up in The Troubles. I’m sorry she didn’t get to reap the benefits,” the nun, who declined to be named, said.

Northern Ireland’s political parties from both communities called for calm in a rare joint statement condemning the murder.

But there has been little sign that the mainly Catholic Sinn Fein and pro-British Democratic Unionist Party (DUP) are close to restoring their power-sharing arrangement. The last set of talks ended in failure more than a year ago.

“We need genuine power-sharing but I need a partner in which to do it,” Sinn Fein’s leader in Northern Ireland, Michelle O’Neill, told Ireland’s Newstalk radio earlier on Wednesday.