Why over 20,000 people were tracking this Kenya Airways flight 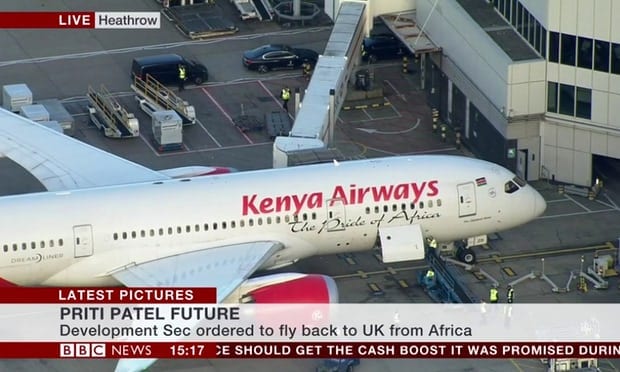 A Kenya Airways flight – KQ 100 – was the most tracked plane on Wednesday, November 8, 2017 according to Flightradar24, a Swedish internet-based service that tracks air traffic in real time from around the world.

This is after reports emerged that British Cabinet Minister Priti Patel was on board the plane en route to London after she was forced to cut short an official trip over a controversy that could see her sacked from her job.

Ms. Patel was ordered back to the UK by Prime Minister Theresa May to explain secret talks she held with Israeli politicians – including the country’s Prime Minister Benjamin Netanyahu –  in which she reportedly raised the possibility of Britain diverting aid to the Israeli army.

By the time of publishing, more than 22,000 users were tracking flight KQ 100 which left Nairobi at around 9.40am.

According to The Independent, Ms. Patel, who is the International Development Secretary, is expected to be sacked after evidence emerged that she misled Theresa May over the secret meetings that reportedly happened while she was on holiday in Israel in September.

These details emerged last week and on Monday (November 6), Ms Patel was censured by the prime minister for breaking protocol. She apologised and the issue seemed to have been settled until Tuesday (November 7) when her department is reported to have admitted that she held two further meetings in September – which she failed to disclose when rebuked by Ms May on Monday.

Ms Patel cut short the trip to Africa to rush back for a second confrontation with the Prime Minister.

BBC News showed aerial footage of the KQ 100 plane that landed at Heathrow airport and there seemed to be three black limos waiting alongside, supposedly to pick up Priti Patel.