Why we chose anti-IEBC protests and not parliamentary process – Raila 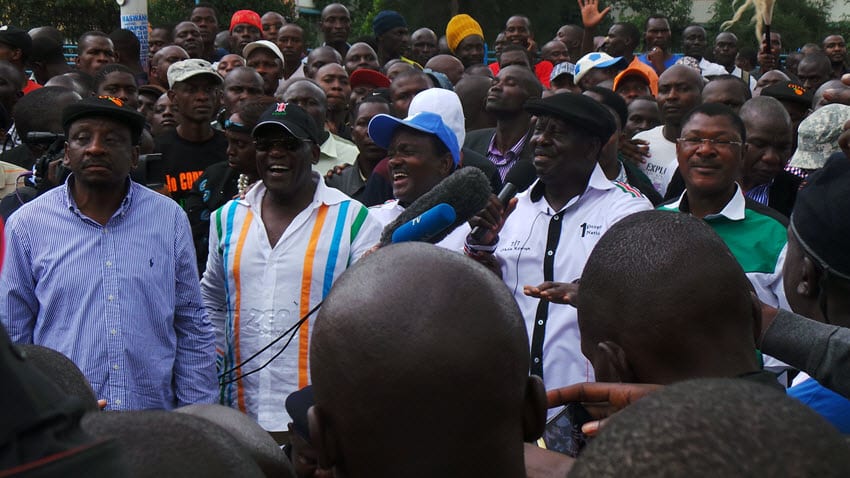 CORD leader Raila Odinga has outlined reasons why they overlooked the National Assembly and opted for street protests in their move to remove the Independent Electoral and Boundaries Commission (IEBC) commissioners from office.

In a statement to media houses on Sunday, Raila said that Jubilee was notorious for using its numbers in Parliament to frustrate petitions by CORD and instead pass laws and motions that apparently compromise the interests of the people.

“A petition, filed by Mr Wafula Buke mid-2014, for example, laid out various charges against the commissioners, which alleged that they had failed in their work and that they had been corrupt,” read the statement in part.

“Wafula’s petition was buried in accusations that he had been sent by CORD to fight the commissioners and in the end he was never accorded serious consideration. Jubilee marshaled its numbers in the house and threw out the petition.”

He said that one of the charges in Buke’s petition was gross mismanagement of public finances by IEBC commissioners in the procurement of biometric voter registration and voter identification devices.

“There is now before the National Assembly a report of the Public Accounts Committee that has found Chairman Isaack Hassan, Commissioners Thomas Letangule and Mohamed Alawi guilty of interfering with the procurement of these devises,” said Raila.

“The committee also wants full investigations launched against the Chairman Isaack Hassan, the Commission’s CEO Ezra Chiloba and the eight commissioners for the loss of Ksh4.08 billion of taxpayers’ money.”

The CORD leader however faulted Parliament for supposedly planning to decide the fate of the report based on the political interests of Jubilee.

He also accused the Ethics and Anti-Corruption Commission (EACC) of ignoring evidence used in prosecuting Chickengate suspects in London and refusing to charge Isaack Hassan and other Commissioners over the claims.

“Under the Jubilee Government however, this trust bestowed upon institutions has been betrayed times over. Very little regard is given to our national values and principles when institutions are exercising the sovereignty donated to them by the people.”

The ODM leader said their decision to go to the streets is derived from Article 37 of the Constitution which gives every Kenyan a right to assemble, demonstrate, picket and present petitions to public authorities.

“We went to the streets to tell the Commissioners of IEBC that they must resign as they have failed in their duty and we have no faith whatsoever in their ability to be impartial in a political contest in which we are contestants,” said Raila.

“We went to the streets to communicate to Parliament that the issue of IEBC Commissioners cannot be decided on a partisan basis to achieve selfish political objectives.”

Raila further claimed that their decision was motivated by the desire to warn the government against protecting IEBC commissioners from the law and from the need to resign; and to encourage Kenyans against siting back and “watching their aspirations betrayed by Jubilee.”

“That is why we are returning to the streets on Monday. We are confident that the Constitution is on our side as we demonstrate and we will remain defiant and undeterred by the violent reactions of the police towards us.”