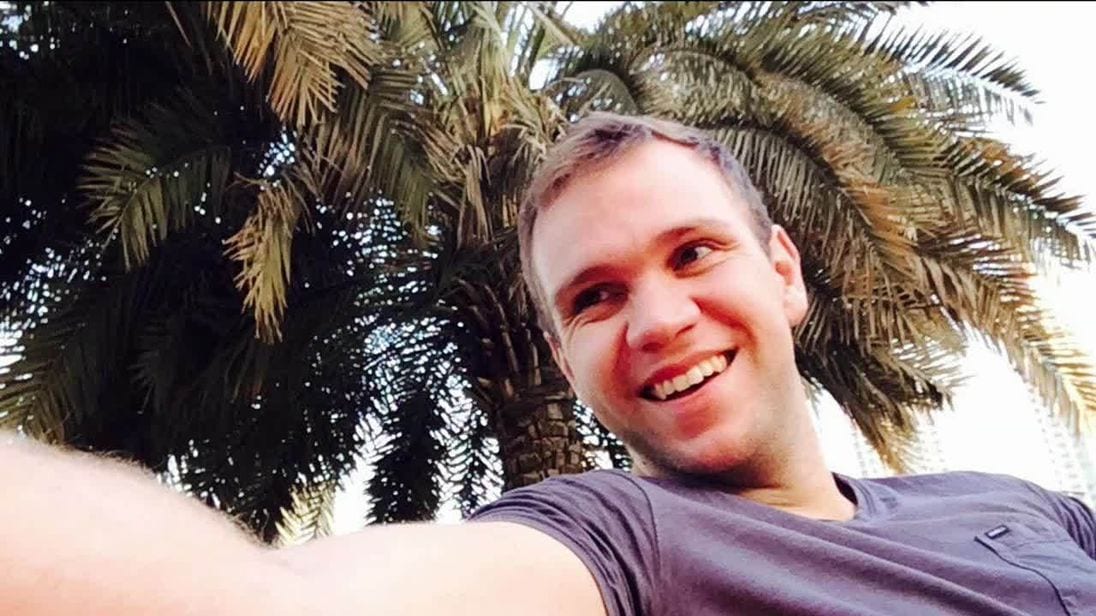 The wife of a British academic jailed in the United Arab Emirates on charges of espionage has spoken of her shock at his life sentence and accused the country of mishandling and misinterpreting his case.

Amid signs that Britain and the UAE are looking for a way out of the diplomatic conundrum, Daniela Tejada told CNN’s “Hala Gorani Tonight” program on Thursday that “the UAE should have the sensibility and the humanity to recognize that it has been a misunderstanding and that Matt has paid for someone’s lack of judgment.”

Matthew Hedges, 31, a specialist in Middle Eastern studies at Durham University in England, was arrested by UAE officials at Dubai International Airport in May.

He was held in solitary confinement for almost six months before being released on bail last month. Hedges and his wife have repeatedly denied the allegations of spying, but prosecutors insist the British academic confessed.

In her first TV interview since her husband’s sentencing on Wednesday, Tejada said, “It’s not unheard of that governments — in authoritarian regimes particularly — misinterpret research as espionage work or as a threat.”

She continued, “Matt, sadly, is the first person to endure such a travesty in the UAE as a Western academic, but it happens very frequently in other countries in the Gulf and it happens to Emirati academics.”

Tejada’s remarks came shortly after her first meeting with UK Foreign Secretary Jeremy Hunt on Thursday. She had earlier accused the Foreign Office of failing her husband by putting ties with the UAE above the freedom of British citizens.

“I wish that my concerns had been taken more seriously from day one. … But I’m positive that at least now that the Foreign Office (is) taking a firmer stance,” Tejada said.

After the meeting, Hunt tweeted an update to the diplomatic spat, saying he had “just had a constructive conversation with the UAE FM Sheikh Abdullah Bin Zayed.”

“I believe & trust he’s working hard to resolve the situation asap,” he added.

Life interrupted
Hours earlier, the UAE signaled hope for Hedges and his family in a statement that stressed the importance of relations with the UK.

Its Ministry of Foreign Affairs and International Cooperation said via state-run news agency WAM that Hedges can appeal the court decision within 30 days and that families “also have the right to appeal for Presidential Clemency on behalf of convicted relatives.”

It added: “The UAE is determined to protect its important strategic relationship with a key ally.

Officials from both countries have discussed the matter regularly over recent months. Both sides hope to find an amicable solution to the Matthew Hedges case.”

In response, Tejada told CNN, “I hope they indeed reach an amicable solution and that solution is to bring Matt back home. I will not rest until I have him back and safe and home with me.”

The UAE reiterated that Hedges had been “treated fairly and according to the constitution,” with access to medical and psychological care, translators and British Consulate officials.

But Tejada refuted those assertions.

“I don’t trust the UAE judicial system. The way the case has been handled has been very concerning and against all international standards in spite of what the UAE insist on,” she said.

“Contrary to their statements for example, he did not have medical and psychiatric care throughout.”

Tejada said Hedges was only permitted three visits from British Consulate officials — the first of which came after six weeks of detention.

“He did not have medical and psychiatric support,” she added. “He did not have access to legal counsel throughout the interrogation process and the months that followed. … He did not even know his lawyer’s name until three or four days ago.”

Tejada said she does not know her husband’s whereabouts and has not been allowed to speak to him since the court ruling.

“It’s very tough to just think about what might be going through his head. The terror that he must be feeling and just the sheer sadness that the country that he considered to be his second home — since he lived there for so many years — has paid him back with such mistreatment and injustice,” she said.

In a desperate attempt to uncover any misunderstanding there may have been with the UAE, Tejada said she combed through her husband’s emails dating back to 2013 but failed to find anything that might implicate him.

Instead, she insisted he is innocent and desperately hopes he will be freed before the holidays and back for their second wedding anniversary in January.

“I just wish that the people who have decided to take his fate into their hands could see that he’s not just a man on his own,” Tejada pleaded.

“He’s a man with a family and he’s a man with a young wife who loves him, who he has plans to have children (with), and a dog and a house in the countryside, and a man who means no harm,” she said.

“I never meant any harm when I went out to the press. I just want him back.”