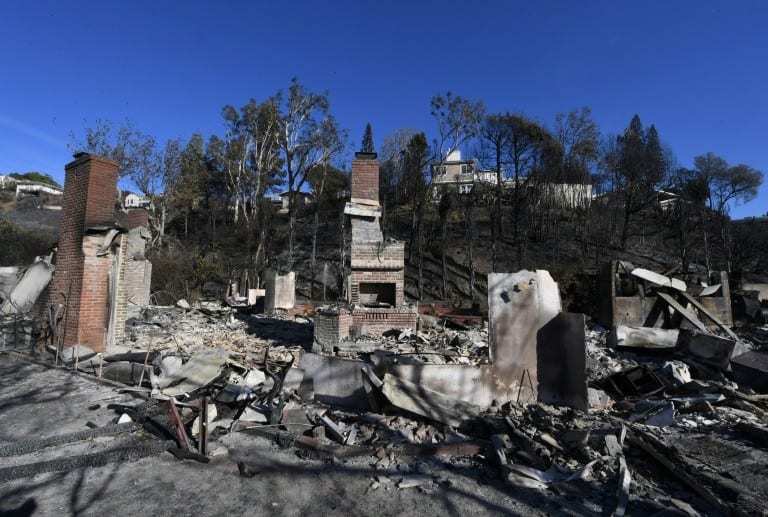 Firefighters on Thursday battled raging wildfires across southern California that have forced tens of thousands of people to flee their homes, including residents on the outskirts of Los Angeles, America’s second-largest city.

Winds with hurricane-force gusts of up to 80 miles per hour (130 kilometers per hour) fueled the blazes, creating apocalyptic scenes of hillsides engulfed in billowing smoke and towering plumes of flame.

Despite the intensity of the fires, only one fatality has been reported so far. Tim Lohman of the Ventura County Sheriff’s Office said an unidentified body had been found overnight.

A total of six major fires are now burning, and flames are heading south towards Santa Barbara and San Diego.

Officials said the strong winds fanning the fires are forecast to last through Saturday, making for extremely dangerous conditions. 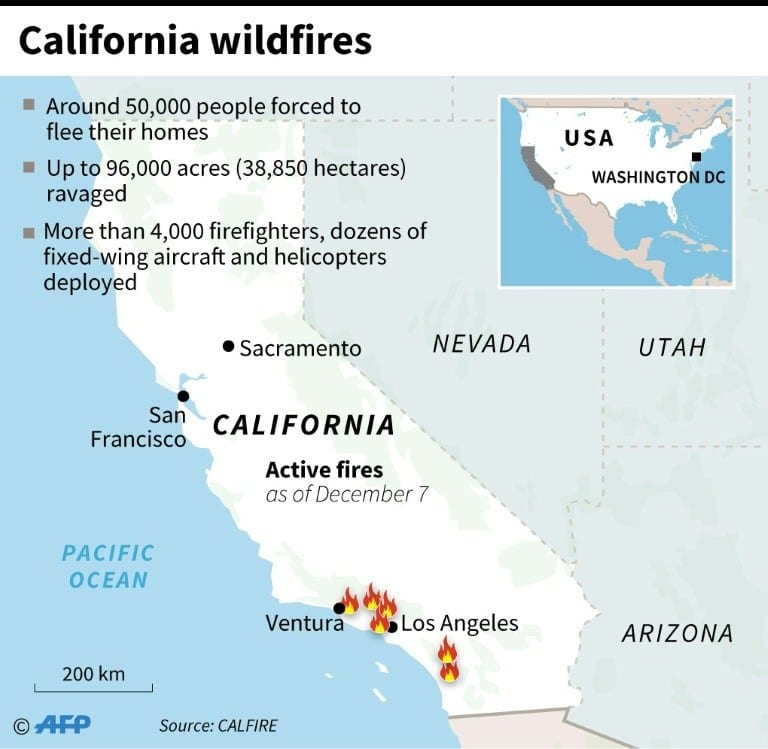 Graphic illustration of the California wildfires

More than 4,000 firefighters and dozens of fixed-wing aircraft and helicopters have been deployed to combat the fires in Los Angeles County and Ventura County, fire officials said.

About 90 minutes south of Los Angeles, two fires were moving swiftly toward the town of Murrieta, scarring more than 900 hectares (2200 acres) of land and threatening hundreds of homes.

“We hear propane tanks blow up. It means that a house is burning. It’s very sad,” said one resident standing near the fence of a ranch in the rural area, where many horses have had to be evacuated.

The Pentagon announced that the California National Guard is deploying 65 troops to assist in the firefighting efforts, which are being hampered by the seasonal Santa Ana winds.

“There will be no ability to fight fire in these kinds of winds,” Cal Fire chief Ken Pimlott said.

“Extremely dry conditions and Santa Ana Winds will continue to elevate fire danger,” Cal Fire said in a tweet. “Prepare now to ensure if evacuated you and your family are ready to GO!”

Multi-million dollar mansions were destroyed in Los Angeles’ Bel Air neighborhood, where many celebrities own homes and media tycoon Rupert Murdoch has a $30 million estate, the Moraga Bel Air Winery.

Besides Bel Air, affluent Los Angeles neighborhoods between Mulholland Drive to the north and Sunset Boulevard to the south were part of the evacuation zone.

The University of California, Los Angeles cancelled classes — two days before the start of final exams — as firefighters battled the “Skirball” fire near the sprawling campus.

Further to the north, in Ventura County, an even bigger blaze, the “Thomas” fire, was raging and threatening several coastal and inland towns.

Los Angeles Mayor Eric Garcetti said over 230,000 people have been forced to evacuate in Los Angeles and Ventura counties.

Major north-south highways, including the famed Route 101, were closed temporarily as the fire jumped over the road and menaced beachfront homes.

Police knocked on doors and used loudspeakers to make sure everybody had left their homes.

The singer Lionel Richie cancelled a concert to help his ex-wife flee the area, while comedian Chelsea Handler and designer Adrienne Maloof were among those tweeting that they had to evacuate.

Among those evacuated was model Chrissy Teigen, wife of singer John Legend.

“Never thought I’d get to actually play what I thought was a hypothetical game of what would you grab if there were a fire,” Teigen wrote on Twitter.

“We are fine and we will be fine. Thinking of everyone else affected and continuing my lifelong intense love of firefighters,” she added.

Forecasters predicted that the winds could cause fires to spread further, threatening more homes and the acclaimed Getty Center museum.

The Getty — home to masterpieces including works by Monet and Rembrandt — was closed.

Museum authorities tweeted that air filtration systems are protecting the galleries from smoke.

This has been California’s deadliest year ever for wildfires. More than 40 people died in October when fires ravaged the state’s wine-producing counties north of San Francisco.