Will President Kenyatta’s Lamu visit win him the Coastal vote? 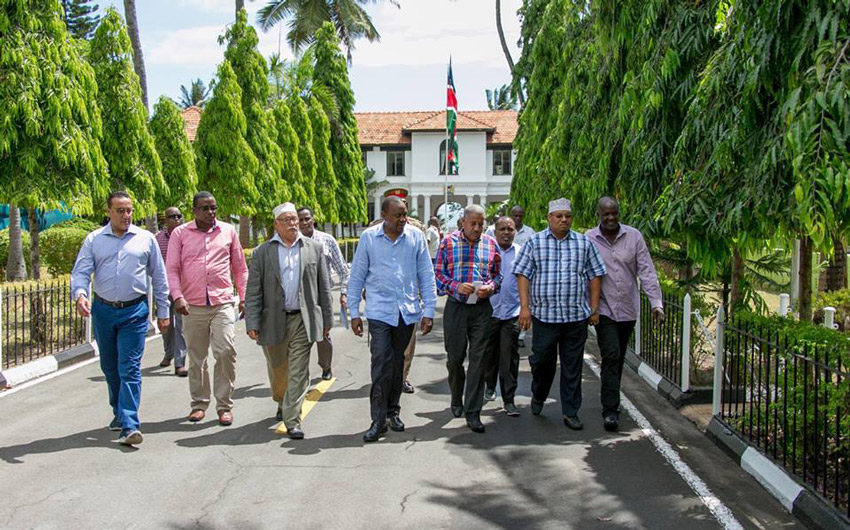 President Uhuru Kenyatta is on a two-day visit of Lamu County amid high expectations from political leaders and residents from the Coastal region.

The visit comes just a day after the Head of State met leaders from the County at State House, Mombasa to discuss a host of issues including title deeds issuance to controversial Waitiki Land squatters, repossession of grabbed land and development projects.

In his Wednesday meeting, the President said he will issue title deeds to land owners in seven villages in Mkunumbi and called on residents to use the land to improve their welfare.

“You can set aside land for industries, markets and other public amenities that will directly improve the lives of the people,” President Kenyatta said.

The President has promised goodies for the region including development of the county’s infrastructure and setting up many other projects.

The Head of State assured Lamu residents that his government is keen on improving the road networks in the county, starting with the tarmacking of the Witu – Mokowe road.

“I will personally make a follow up to ensure that improvement of this road is not delayed. We want to make 2016 a historical year when Lamu County joins the rest of Kenya in development, especially in infrastructure,” President Kenyatta said.

He further stated that the government will release Ksh 100 million in its Supplementary Budget for the improvement of Lamu Hospital in line with the objective of the national government to upgrade two health facilities in each county to referral status.

President Kenyatta will visit Mpeketoni and Mkunumbi on Thursday and conclude the visit on Friday in Lamu Island.

The visit comes at a time when the government, through security agencies is making frantic efforts to curb insecurity in the attack-prone area.

The region, which is a key tourism destination, has been riddled by insecurity with the most notable one being the Mpeketoni terror attack that left at least 60 people dead and several others injured in June 2014.

Politically, Lamu is widely considered a politically lukewarm region with no clear Jubilee or CORD majority.

Out of the elected and nominated Members of County Assembly, Governor Issa Timamy’s UDF has three, same as Farmers Party and Safina while TNA and New Democrats have two members each.

In addition to following up on development projects in the region, President Kenyatta’s visit is also seen as a key political trip aimed at winning support for his administration and presidential bid in the 2017 General Elections.