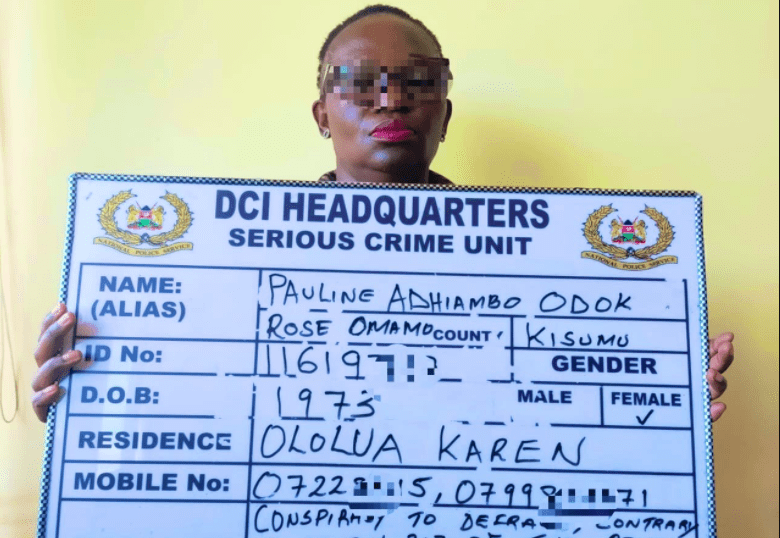 Detectives from the Directorate of Criminal Investigations (DCI) on Thursday arrested a suspect wanted for allegedly defrauding a foreigner of Ksh.300 million in a fake gold scam.

Pauline Adhiambo Odok alias Rose Omamo, who has reportedly been on the run since May last year, was nabbed at Ololua, Dam Estate.

According to detectives, the suspect runs her operations by masquerading as a senior government official’s relative in order to earn the trust of her victims.

She is said to have convinced Southorn Chanthavong, a director of Simong Group Company based in Lao, that she was in a position to sell him gold.

Pauline allegedly, together with other accomplices who have since been charged, lured Chanthavong to an office in Kaputei gardens, Kileleshwa, where they showed him genuine gold bars in heavy metal boxes and immediately struck a deal.

The sleuths stated that – between May 8, 2019 to May 25, 2019 – a few more meetings took place during which the victim paid Ksh.300 million for the consignment of gold on the promise that it would be delivered to his home country in Lao.

“It is after he had parted with the money being payment for the consignment that things started going south. Chanthavong, who had been told to wait for his shipment in Lao, a top rice producing country in Southeast Asia, realized that he had been conned after being taken on a wild goose chase for weeks, when the shipment failed to arrive,” read a statement from the DCI.

“Immediately the victim reported the matter to detectives, Pauline went into hiding prompting a warrant for her arrest to be issued in January 2020.”

DCI detectives, acting on a tip-off from a member of the public who had spotted Pauline, arrested her in Ololua.

She is currently in custody awaiting arraignment to answer to charges of conspiracy to defraud.