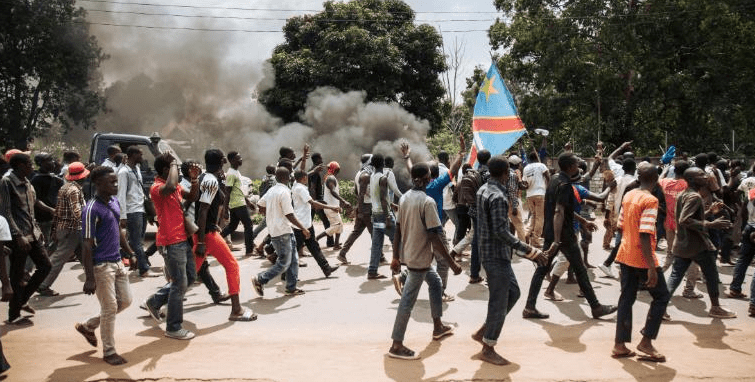 Yet another delay of the Democratic Republic of Congo’s long-awaited presidential election has raised questions over the vote’s credibility, sparking violent protests in parts of the country already roiled by conflict and an ongoing Ebola outbreak.

Congo’s long march to Sunday’s polls took a turn for the worst on Wednesday when the country’s electoral commission announced that it would be delaying the vote in three opposition strongholds due to “the persistence of the Ebola disease” and “the threat of terrorism.”

Sunday would have marked the country’s first ever democratic transfer of power, but the commission’s move has all but guaranteed contested results.

Voters in Beni, Butembo and Yumbi will not be able to cast ballots until March, two months after the presidential election results are expected to be announced on January 15.

Still after more than two years of delays — the last announced just three days before the originally scheduled December 23 vote — an election, however flawed, could offer a glimmer of hope in sub-Saharan Africa’s resource-rich giant.

Conflict and unrest ruled Congo long before its independence from Belgium in 1960. And as a battle against the world’s second deadliest Ebola outbreak in history continues, containment is hampered by ongoing violence.

For nearly 18 years, Congo’s other constant has been President Joseph Kabila, who came to power amid crisis in 2001 at the age of 29 following the assassination of his father.

While Kabila pacified the country’s west, especially around the capital of Kinshasa, his legacy for the vast majority of Congolese will be defined by corruption and conflict, with millions displaced by continued fighting and most living in extreme poverty. Six out of seven Congolese live on less than US $1.25 a day.

Meanwhile, Kabila and his cronies have benefited from Congo’s vast natural resources, including the highly lucrative mining of coltan, cobalt and other rare minerals that power electronic devices the world over.

New York University’s Congo Research Group documented the Kabila family’s vast business empire of more than 80 companies from mining to farming, to banking to telecommunications and airlines with hundreds of millions of US dollars in revenues. Unsurprisingly, 74% of Congolese polled by the research group said they had a negative view of Kabila.

But the potential for much-needed political change remains in doubt. Two years after his term expired, Kabila has clung to power by violently cracking down on protests and suppressing the opposition. So it was a surprise when the strongman announced in August he would be stepping down and an election would finally take place.

Just weeks before the vote though, Kabila hinted that his time away from power may be short lived. “Ruling out in politics, in life in fact, you shouldn’t rule out anything because anything and everything is possible,” Kabila told a group of reporters in December.

Those comments led many to wonder if he was adopting a previous strategy from Russia’s Vladimir Putin, who in 2008 sat out one term as president, only to return four years later. Kabila may yet return as the DRC’s leader in 2023.

On the campaign trail, the ruling party’s candidate and Kabila’s former interior minister Emmanuel Ramazani Shadary has made it clear that he is faithful to his former boss and party head. Telling supporters at an initial campaign rally: “This is the province that gave birth to the chief Kabila and he is the one, chief Kabila who chose me to be candidate.”

There’s reason for the Shadary camp to expect victory. The fractured opposition consists of some 20 candidates. Only two have a serious chance, former ExxonMobil manager Marin Fayulu and Felix Tshisekedi, president of the largest opposition party.

It’s the names missing from the ballot, including popular former Katanga province governor Moise Katumbi, that are particularly telling. Katumbi has been living in exile, blocked from entering Congo and barred from the election.

Outside election observers have also been banned, including the European Union and the Carter Center. The election commission has stood firm against what it sees as outside interference.

It has also shrugged off offers of assistance from the UN mission (MONUSCO) including air transport, crucial to holding an election in such a vast country, much of which lacks basic infrastructure.