Acclimatise in bed, climb Everest in half the time 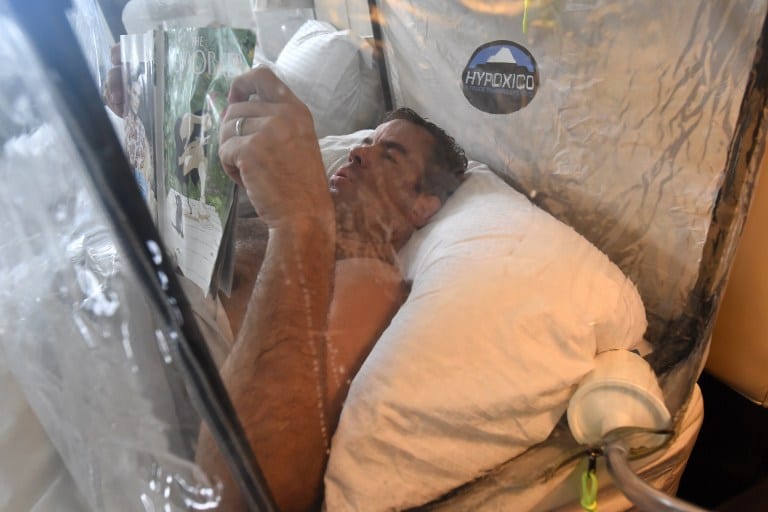 As other Everest hopefuls were trudging up to base camp in April, Singapore-based Brooks Entwistle was at home, planning his daughter’s 13th birthday party and preparing for his company’s annual general meeting.

But at night he would climb into a hypoxic, or low oxygen, tent meant to mimic the thin air at high altitude.

Now on Everest, Entwistle, a partner with Singapore’s Everstone Group, is hoping to summit the world’s highest peak in just 35 days – half the time of a conventional climb.

For decades, the dream of reaching the summit of Mount Everest has required at least two months on the mountain doing a series of acclimatisation rotations to get used to the harsh low-oxygen environment at the top of the world.

Now pre-acclimatisation, which has been at the fringes of the climbing world for several years, is gaining traction, dividing the community between those who see it as yet another tool of modern mountaineering and purists who dismiss it as a gimmick.

An increasing number of expedition organisers are offering “rapid ascent” packages that allow clients to pre-acclimatise in a tent at home before zipping up the world’s tallest peaks in just a few weeks.

Entwistle and climbers with at least two other operators are attempting to summit Everest this year after using pre-acclimatisation tents, each paying between $75,000 and $85,000, more than double the cheapest rates to scale Everest the conventional way.

“We’ve been doing this for a few years, now we’ve seen other companies offering it as well… their clients are demanding it,” said US-based Adrian Ballinger of Alpenglow Expeditions, who started experimenting with the tents in 2011.

“People are actually healthier on the climb because they don’t spend so much time on the mountain,” said Ballinger, who took one client up Everest in 2013 using the system and another four in 2016.

In 2014, Entwistle had a rare nine-month break from work. He headed to Everest in early April to begin acclimatising and planned to make a push for the summit in mid May.

But his plans were disrupted by an avalanche that killed 16 Sherpa guides and effectively shut down the climbing season.

“I don’t have time like that now. For me, it would be impossible to go up Everest without this method,” Entwistle said.

Hypoxic tents have long been used by athletes to build up lung capacity as part of their training.

Nitrogen is pumped into the sealed tent to recreate a high-altitude environment by reducing oxygen levels so that the body adapts to thinner air.

“I believe every climber has used technologies of the day to the maximum they can, whether for communication or training. Today, hypoxic training is one of those tools,” said Ballinger, who is taking Entwistle and one other client up Everest from the northern Tibet side this year.

Ballinger requires climbers on the ‘rapid ascent’ packages to have previously climbed at least one of the 14 mountains in the world that are over 8,000 metres.

Next year, Austrian company Furtenbach Adventure is taking it to the next level with a ‘Flash Everest’ package that promises a summit in less than four weeks, aided by hypoxic tents and increased supplemental oxygen.

Veteran expedition operator Simon Lowe is a vocal critic of the method, calling it “quack medicine”, and believes in the traditional mantra of climbing high and sleeping low.

“This (pre-acclimatisation) is the inverse of what we know works,” Lowe said.

Lowe says that the method only gets results because companies provide the climbers with much more supplemental oxygen than on a conventional climb.

That brings its own problems, requiring Sherpa guides to make repeated risky climbs to leave additional oxygen bottles for the climbers to collect during their ascent, while also resulting in more empty canisters left on the mountainside.

“If you extend this to everybody, it will be a disaster. They (pre-acclimatised climbers) won’t have the flexibility to respond to Everest and its weather and will take risks putting everyone in danger,” Lowe added.

American climber Kent Stewart, who has scaled the highest peaks on six continents, intends to pre-acclimatise before his bid to complete the “Seven Summits” with Everest next year.

Stewart suffers extreme weight loss during expeditions and found the tents to be a useful way to shorten his trips.

“You eat and sleep at home and are not exposed to the dangers of being on the mountain,” Stewart said.

Ballinger agrees and says the technique is here to stay.

“I predict that in 10 years there will be no 65-day expeditions with supplemental oxygen up Everest.”