Ambaka and Shujaa out to exorcise Olympic ghosts of Rio 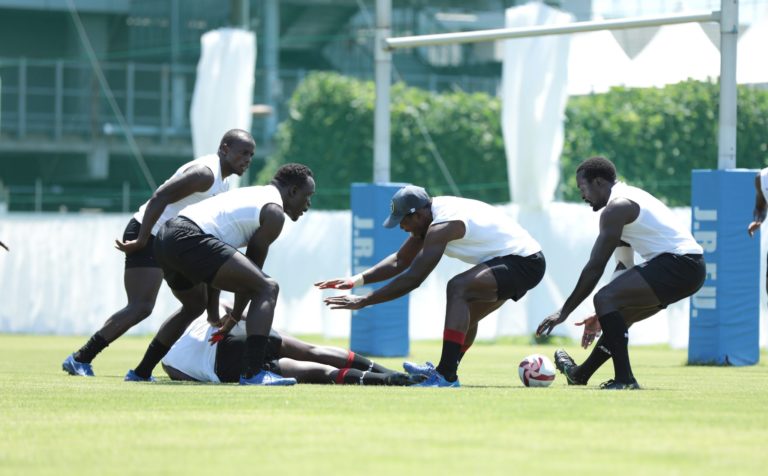 With just a few days to the start of the rugby sevens programme at the Tokyo 2020 Olympic games, national sevens team Shujaa are now taking it easy in the sweltering heat of Tokyo. Willy Ambaka who now plies his trade in Russia says they are now focused on game one.

“We are now close to the business end of things. We all know the Olympics is the pinnacle of all games. The boys are excited and we can’t wait to get the run out on Monday.”

Ambaka was part of the team that played at the Rio Olympic games five years ago where they failed to progress past the group stage. Things will be different this time around, he promises.

“We have an experienced squad, but we have to be careful not to let emotions get into us. We just need to stay calm and with a peace of mind and just get the results out of Tokyo.”

While many are complaining of the soaring temperatures and humidity in Tokyo, Shujaa seem to have embraced the change of climate from the freezing conditions back in Nairobi.

Ambaka says ”It is not as bad and I am sure the boys are loving it to be honest. We have always complained of the cold weather. We thank the government and the National Olympic Committee for getting us here early to acclimatize and getting our bodies right; ready for the special occasion on Monday,” he added.

A lot is expected of Shujaa despite not having a lot of tournaments to play due to the coronavirus pandemic. The advantage is that all teams were grounded, save for a few that played one or two international tournaments. Ambaka feels the time invested in this team will reap rewards.

“The process started way back in October and I am pretty sure that now is just polishing up and just ensuring we stay hydrated, recover well and sleep well. We have put in the hard work and the boys are ready to face the world.”

While the rest of the team came from Nairobi, Ambaka flew in to Japan late, though he caught up with the team in training in Kurume City before the switch to Tokyo. He was busy playing for his club in Russia.

“It is also Sevens’ rugby, just different styles of play over there, but if you know what you are doing, it shouldn’t be difficult. I have been in the set-up for quite some time. I know what I need to do to get my body right. I am excited to be with the boys, running with them and eager to play,” he observed.

Shujaa are in a tough pool on paper together with Ireland, USA and South Africa. Their target is to top the group to make a huge statement of intent in Tokyo. Shujaa have played all these teams before and won against them. Covid -19 is posing interesting challenges with almost all teams at par- rusty from not playing tournaments in the past almost two years.

“It is a sport and different sports come with pressure. Right now, we have to respect the rules and regulations put in place because of the pandemic. We have been doing this for some time now and we are professional enough to know what to do and won’t let the moment get to us. We just need to be positive towards the game,” concluded Ambaka.