ARD duped me to implicate Kenya in doping says athlete 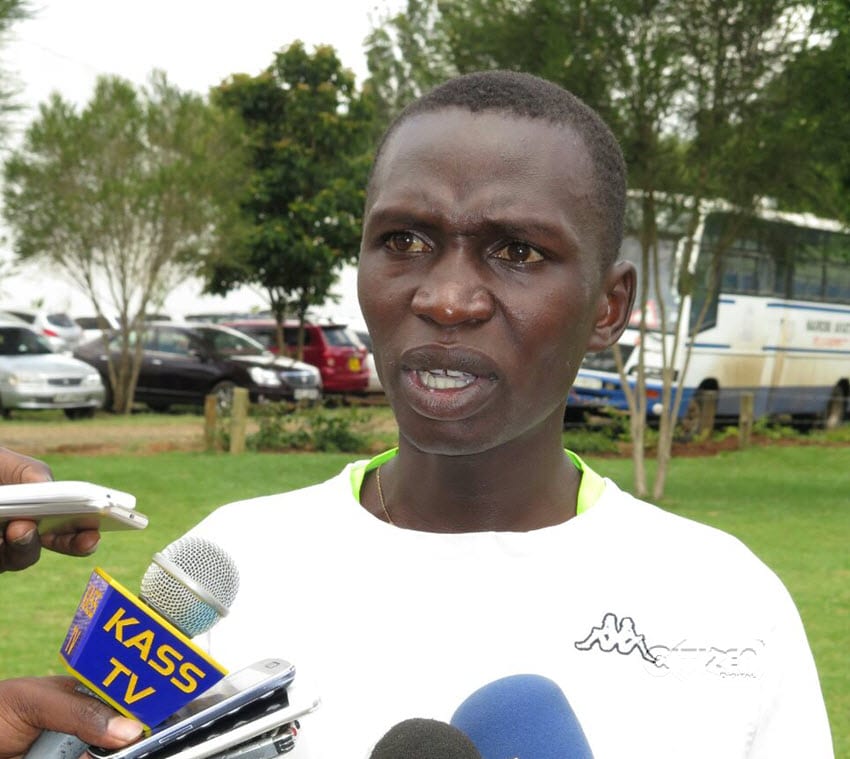 An upcoming local athlete has sensationally claimed renowned investigative journalist, Hajo Seppelt and colleagues working undercover duped him into aiding them gather material for their latest damning expose on accusations of doping among Kenyan and British athletes.

Fredrick Lemishen Ngoyon’s alleges three Europeans visited him twice between April and May, the first two posing as a manager and coach and later another who passed off as an athlete from Scotland named Thomas McDonald.

He asserted first pair promised to secure him entry in the lucrative London Marathon and the latter who came a fortnight after the Sunday, April 24 World Marathon Majors showpiece was the one who stitched him up as one of the athletes purportedly caught buying dope in Eldoret town in a bid to prove banned drugs were readily and easily available in the distance running capital.

The latest documentary that claimed Kenyan and British athletes were using banned blood booster, EPO in an Iten training camp aired on German TV, ARD on Saturday and was published in the UK publication, Sunday Times a day later in a joint investigation.

It is bound to pile international pressure from those calling for Kenyan athletes preparing for the Rio 2016 Olympics next month to be banned from competition including Seppelt’s home nation, Germany with Britain sending two investigators to ascertain the veracity of the damaging claims against their runners.

“I train here in Eldoret and compete in road races until 21km. Yesterday (Sunday) I was totally shocked to be told my name was published in the Sunday Times in the UK that I was using drugs.

“They also shot my video and sent it here in Kenya. I want to state first; I don’t know such things and I was so stunned because three Europeans came here. Two of them, one called John and the other Charles said they were managers and coach and they wanted me to run well at the London Marathon,” Lemishen told reporters in Eldoret on Monday.

“I have been training hard since then and they once took me to Iten to train with a group and we came back to Eldoret. They were staying at Poa Place (Resort) and I was not aware what they were exactly doing there.”

He then charged that the next part of what he termed as a scheme to use him in an effort to discredit the country’s runners amid a doping crisis that has seen the Anti-Doping Agency of Kenya (ADAK) declared non-compliant by global body, World Anti-Doping Agency involved a fictitious runner.

Lemishen claims after the Scot asked him to accompany him to Eldoret, Ksh9000 (USD 90), changed hands between his visitor and another local outside a pharmacy in Eldoret where he had been given a parcel to hold by his guest.

According to him, the next thing he knew after they went their separate ways following what he maintains was a brief encounter outside the Jabara Building in Eldoret was that he was featured in the joint-investigation exposé as one of those using prohibited substances.

Further he bemoaned, authorities have approached him since it was aired saying they had enough evidence to charge him with doping.

“He did not call to say he was coming, he came straight to my house in Sinai (estate). When he got there, I was called to the gate and there was a vehicle, a taxi, waiting outside. I was asked to accompany him to Eldoret.

“When we got to town, I did not know what he was going on. He was holding something in a paper bag parcel. I wanted to know what was in there, if you watched the video; I was speaking because I was enquiring what was going on.

“I was not aware I was being filmed because I did not see anyone with a camera. At the time I was just happy that I was being promised an opportunity to improve my life and when they left without notice, many people were not pleased,” Lemishen claimed.

His mood turned to bitterness at what he said was being used as a specimen without his knowledge to prove rampant doping in a country where over 40 athletes have tested positive for substance abuse since 2012.

“To date, I know nothing about doping. If they say I’m using drugs, they should come even right now and test me, right now! They said they were a coach and manager, that’s what I know.

“The whole idea of coming here to film and photograph me and look for a story from me, I’m not aware of that. If it is possible, they should be brought here to Kenya today so that I meet them and get an explanation why they used an innocent person like me.

“They lied to me; they never told me they’re journalists or investigators, what happened to their promise of the London Marathon?” the athlete complained.

“I don’t know what direction I will take now. I have trained for 15 years and I have never won a race. If you see the modest life I’m living, you will believe I have not earned anything from proceeds of racing using drugs.

“I’m yet to pay rent for my small house as I continue training and yesterday (Sunday) I was told by authorities that I was one of those using drugs and my name is in the Sunday Times and we have done enough investigations,” he lamented.

“I have trained with many people and got to know those who have been helping me eke a living.”

He then delivered his parting shot to the undercover journalists.

“I suspect they are conmen. Why did they claim they are a manager and coach? Why didn’t they identify themselves to me? Why did their phones go off and they did not fulfil their promise?

“Why did they send someone posing an athlete two weeks later? Why did he then give out money without my knowledge what he was paying for after giving me a parcel to hold while asking me not to speak?”

“I have trained since I left school after the death of my father due to lack of school fees and have always been optimistic that one day I will be a successful athlete only to be cheated and used by people who purported to be coaches.”

Report by Cyrus Sholim in Eldoret and Mutwiri Mutuota in Nairobi