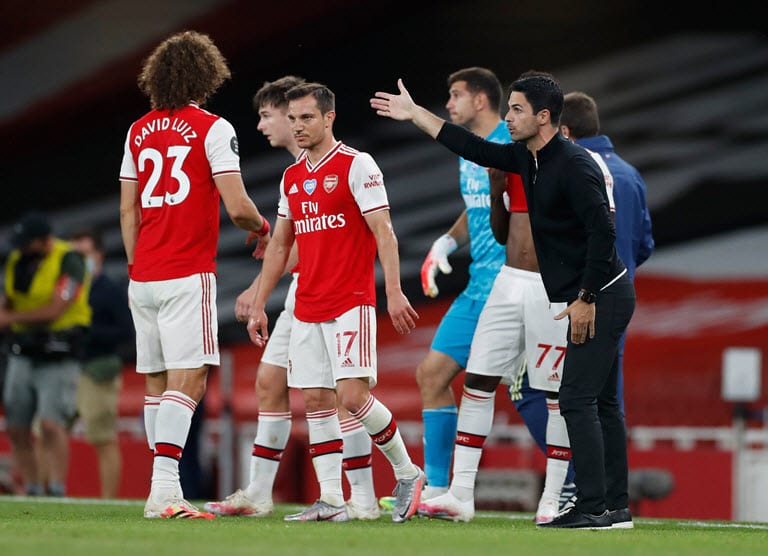 Mikel Arteta offered further evidence that Arsenal may have found the manager to lead them back to glory as he masterminded a 2-0 win over his former club Manchester City in the FA Cup semi-final at Wembley on Saturday.

A month after his first head-to-head against City boss Pep Guardiola ended in a 3-0 Premier League defeat, Arteta proved he is a fast learner as he conjured the perfect strategy to get the better of the man he served as assistant until December.

While Arsenal’s first goal had the stamp of Guardiola’s style of play all over it — an 18-pass move finished off by striker Pierre-Emerick Aubameyang — this was not a case of the apprentice beating the master at his own game.

Guardiola’s sides rely on overwhelming possession and quick passing and movement. They did so again on Saturday with 71% possession and 16 attempts at goal compared to four for Arsenal.

But City kept running into a red wall.

In fact, Arteta’s side perfectly executed the kind of game plan so often used by Guardiola’s old rival Jose Mourinho in his prime with Chelsea, Inter Milan and Real Madrid.

Defensive discipline, shape and unwavering concentration have not been associated with Arsenal in recent years as their stock fell in the latter Arsene Wenger era and under Unai Emery.

But they displayed those attributes in abundance at Wembley with David Luiz, Granit Xhaka, Shkodran Mustafi, Dani Ceballos and Kieran Tierney outstanding in a rearguard action.

When Arsenal did turn over possession, they were lethal on the counter-attack, as the pacey Aubameyang’s second goal 20 minutes from time illustrated perfectly.

In the space of a few days Arsenal have beaten Premier League champions Liverpool and now ended a run of seven straight defeats against Manchester City in all competitions.

A look at the league table, in which Arsenal are ninth, offers a reality check, but 38-year-old Arteta has every chance to claim a trophy just months into his first managerial role.

He said after the game that that there was still a “big margin” between Arsenal and the likes of City and Liverpool.

But the team appear to be heading in the right direction again after seasons of drift.

“Extremely happy and proud of the players,” Arteta said. “When you play this team, you have to give your best and when you have the opportunities you must make the most of them.

“There is a great chemistry between them (the players) and they really believe in what we are trying to do.”

Guardiola would have been the first to congratulate his former assistant, and the loss will be softened by what is still possible in the Champions League where City hold a 2-1 lead over Real Madrid befoere their home last 16 second leg.

The defeat by Arsenal was hard to swallow all the same.

“We started slow and without the way you have to play,” he said. “We are always ready many times but today we were not.

“They defended well. It happened (when Arsenal played) against Liverpool too so we knew it. But we were not good.”