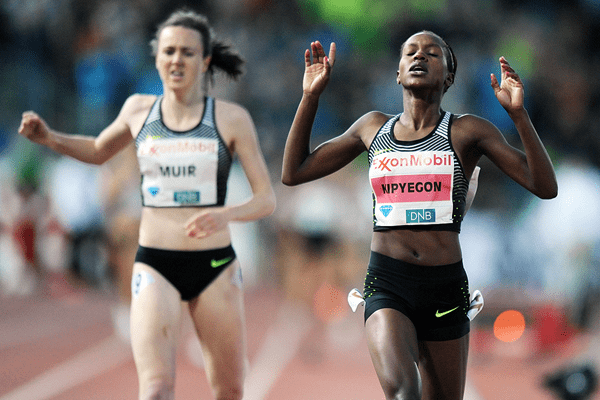 Asbel Kiprop and Faith Chepng’etich Kipyegon padded their Diamond Race leads with convincing victories in their respective Dream Miles at the ExxonMobil Bislett Games on Thursday (9), the signature event of the IAAF Diamond League meeting in Oslo. For Kiprop, the 2008 Olympic 1500m champion, it was the fifth victory in the prestigious race over the classic imperial distance, but his winning margin wasn’t quite as big as some of his other IAAF Diamond League series victories this year. Running well ahead of the pack over the penultimate lap, his closest pursuers sensed an opportunity to pounce as Kiprop slowed visibly over the last 200 metres, but he was safe in the knowledge that he had the race won. Olympic champion Taoufik Makhloufi appeared strongest, leading Elijah Manangoi off the final bend as the pair chipped away at Kiprop’s lead. But they ran out of room. In a blanket finish behind Kiprop, Manangoi edged by the Algerian to finish second, 3:52.04 to 3:52.24, with New Zealand’s Nick Willis fourth in 3:52.26. “I wanted to run fast but the weather changed,” said Kiprop, who remained unbeaten in five 1500m/mile contests this season. “It became too chilly. But I’m satisfied with the season so far. My plan (towards Rio) continues.” Kipyegon showed no signs of fatigue en route to her victory in the first women’s Dream Mile contested in Oslo, winning comfortably in 4:18.60; like’s Kiprop’s performance, a world lead. She did have unexpected company as she approached the bell, with Briton Laura Muir closely tailing the Kenyan until they ran midway through the back straight. It was there that Kipyegon injected a decisive turn of speed to dispense with Muir’s challenge and reverse the finishing order from last year’s 1500m race in Oslo. The 23-year-old held on for second, clocking 4:19.12. “I wanted to run a faster time but it wasn’t possible because of the cold and rain,” said Kipyegon, the silver medallist at last year’s IAAF World Championships and this year’s 1500m world leader at 3:56.41. “But overall I’m satisfied with where I’m at currently.” World champion Hyvin Kiyeng put on a master class in the 3000m steeplechase, beating a solid field by nearly 10 seconds in 9:09.57. How dominant was she? Only 10 other women besides her have ever run faster, yet Kiyeng made it sound like an afternoon jog in Oslo’s central Studenterlunden park. “This is exactly what I needed now, an easy race,” said Kiyeng, who set an African record of 9:00.01 in Eugene. “No pressure, a clear win. Faster times will be on my mind after the Olympic Games, not now.” Kiyeng said a world record assault was also in the cards post-Rio. Ethiopians Sofia Assefa and Etenesh Diro finished second and third in 9:18.53 and 9:19.40 respectively. Rounding out the action in the middle distances, Hagos Gebrhiwet led a top-three sweep for Ethiopia in the men’s 5000m in 13:07.70, holding off Muktar Edris (13:08.11) and Yomif Kejelcha (13:08.34) with a 53.9-second last lap. -Report, pictures and results from IAAF (iaaf.org)