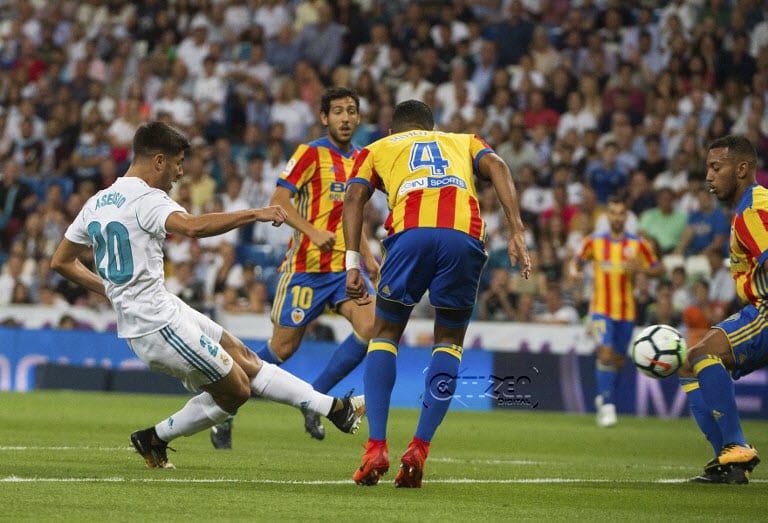 Real Madrid needed a late strike from Marco Asensio to prevent a shock defeat but still saw their relentless winning streak ended by Valencia in a thrilling 2-2 draw at the Santiago Bernabeu on Sunday.

Asensio had got the hosts off to the perfect start after just 10 minutes, but Carlos Soler rounded off an excellent Valencia team move to level shortly after.

Valencia stunned the Bernabeu when Geoffrey Kondogbia, who joined the club this week on a season-long loan from Inter Milan, swept home Rodrigo’s cross from the edge of the area.

However, like on so many occasions last season, Madrid had a late reply as Asensio curled home a free-kick seven minutes from time.

A draw ends Real’s eight-game winning run stretching back to May and sees the European champions fall two points behind rivals Barcelona after just two games of the La Liga season.

“I can’t be happy with the result, but the performance was excellent and we deserved more today,” said Madrid boss Zinedine Zidane.

“We’ve lost two points, but I am very proud of my players.

Valencia have endured two dreadful years, finishing 12th for the past two seasons, but there were further encouraging signs of a revival under new coach Marcelino Garcia Toral after their opening day win over Las Palmas.

“It was a great spectacle,” said Marcelino.

“A draw was a fair result, although either side could have won.

“I am sure the fans will be proud of their players.

“You can see what we are working on and that we want to be a solid and bold team.”

Madrid were without the suspended Cristiano Ronaldo and Sergio Ramos and their presence at both ends of the field was felt in a wide open game filled with chances at both ends.

Another Real win looked on the cards when Asensio pounced on a slack pass from Kondogbia to fire into the bottom corner just 10 minutes in.

Yet, Valencia showed they are made of sterner stuff this season in their reaction to going behind as a fine team move cut open the Madrid defence down Valencia’s left and Toni Lato’s cross was turned in by Soler.

Isco and Karim Benzema twice then passed up huge chances with just Neto to beat as Real ended the half firmly on top.

Madrid’s pressure continued after the break as Casemiro and Luka Modric saw long-range efforts tipped wide by the impressive Neto.

However, Valencia were also posing a threat on the counter-attack as Simone Zaza headed over a golden chance when unmarked 10 yards out before Keylor Navas produced a stunning save from Dani Parejo’s free-kick.

Valencia thought they had secured their first win at the Bernabeu since 2008 when Kondogbia swept home Rodrigo’s cross from the edge of the area 13 minutes from time.

But Asensio rescued Madrid when his free-kick wrong-footed Neto.

And they should have snatched all three points when Benzema fired wide from point-blank range before being denied by Neto once more in stoppage time.

Elsewhere on Sunday, there was a trio of 1-0 away wins for Sevilla, Leganes and Athletic Bilbao.

Sevilla got their first league victory of the season thanks to Paulo Henrique Ganso as his sensational flicked finish with the outside of his left foot saw off Getafe.

Leganes moved up to fourth with a surprise win at Espanyol thanks to Martin Mantovani’s solitary goal.