At 24, Cross King Kamworor is just getting started 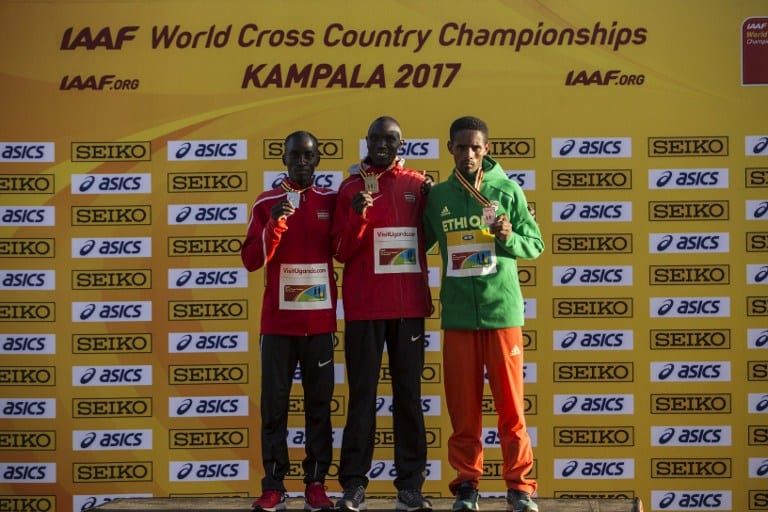 The most frightening statistic of the now two-time IAAF World Cross Country king, Geoffrey Kipsang Kamworor is that he is only 24 years with a whole career ahead, not behind him.

On Sunday at the Kololo Independence Grounds in Kampala, Uganda the multitalented athlete gave the world another timely reminder of his supremacy when he became the first man in 11 years to hold on to the senior men long race title or as they say- the Holy Grail of cross country running by stopping the clock at 28:24.

To round off his personal fairytale, Kamworor once again made international headlines exactly a year to the day he won his second IAAF World Half Marathon title in Cardiff.

“I did not want to be known as the former World Cross champion. Today (Sunday) was March 26 and I told my teammates that I would go for the title since I defended the World Half on the same day last year.

“The next thing for me is the 10,000m at the World Championships. It is really eating my mind, giving me sleepless nights because I really want to have title. In 2015 I tried my best to attain silver in Beijing but this year in London, I’m going to work hard to win the 10,000m,” the beaming Kenyan said.

He had just delivered the most coveted title at the World Cross to his homeland with the added bonus from a Kenyan perspective of breaking Ugandan hearts in the process.

Until the final two kilometres, Kololo was buzzing- scrap that- the Independence Square was absolutely rocking in delirium as the poster boy of Ugandan athletics; Joshua Kipkurui Cheptengei motored around the hilly course like a man possessed.

Having witnessed Jacob Kiplimo storm to history books as the first ever Ugandan winner at the World Cross in the men Under 20 race, the home crowd led by President Yoweri and First Lady Janet Museveni hoped for another miracle ending to the global competition that attracted 59 nations and over 560 runners.

Unhinging himself from the field in the third lap Cheptengei shifted through the gears and literally ran for the fabled seven hills of Kampala with only one aim in his mind- to become Uganda’s latest celebrity and spark a similar mass hysteria that greeted Kiplimo’s victory only an hour before.

First Lady Janet who is also the Minister for Education and Sport who was standing at the VIP stand led the raucous home crowd in cheering to the rafters as a slew of Ugandan coaches- perhaps foolishly- ran alongside Cheptengei urging him to step on the gas.

When Cheptengei led through 8km in 22:21, an entire nation dreamed.

“When I saw him take off, my first thought was to follow him but I decided to maintain my pace since I saw it was too early. The course was tough and it was hot and humid and his pace was very difficult to maintain to the end,” the Guiyang 2015 and Kampala 2017 World Cross winner added.

In the end, his well calculated and constant speed in the punishing conditions landed him the prize they all wanted when he led 132 finishers across the tape running splits of 5:12, 5:50, 5:46 and 5:45 in the first eight kilometres before signing off the victory with a final lap of 5:51.

National champion and Japan based Leonard Barsoton stormed home in 28:36 to gracefully accept his first senior silver at a world event as Ethiopia’s Abadi Hadis (28:43) ran from deep to claim the bronze.

With the mercury rising to 26 degrees Celsius and humidity at 65 percent, Cheptengei’s suicidal pace was ruthlessly punished when Kamworor, egged on by the sizeable Kenyan crowd that travelled to support their team to Kololo reeled him in before powering past to take the gold.

As he completed the final strides for victory, the home crowd was stunned to stone silence as Ugandans looked on in disbelief, as they saw their presumptive glory being ‘robbed’ before their eyes by their neighbours and bitter rivals.

“I knew I was getting closer to him when I heard people shouting and I knew they were Kenyans. I did not want to let them down since they had come all the way overnight, they did not sleep to give us support.

“I really wanted to show them we are together and give them morale for the next event so that they can always give us support,” Kamworor explained on his special day.

Cheptengei who stuttered and propelled backwards as the brutal effects set in bravely carried on to finish 30th (30:88) a minute and 44 seconds behind the winner with his splits reading 5:12, 5:50, 5:45, 5:34 and 7:47 for the final 2K- clearly illustrating how the searing pace in the third and fourth laps killed his and Uganda’s fairytale.

Kamworor was quick to offer his commiserations to his colleague at the Global Sports Training Camp in Kaptagat where they share the same coach, Patrick Sang who was also at Kololo.

“I did not know how he trained in the final weeks ahead of the World Cross but we kept in touch on WhatApp where he was joking that he will beat me since it’s his home ground and told him I was the champion.

“He works hard and deserved to get something for the race and he will be a good athlete for the future,” he added.

Needless to say, his World Cross honours list would have expanded had the competition not ceased being an annual affair six years ago but Kamworor is keen to chase more history at the event as he tied William Sigei (1993 and 94) as a two-time senior race winner to add to his junior title from the 2011 edition in Punta Umbria, Spain.

“I would like to go for as many medals as possible,” he declared.

Kamworor was spotting a wreath made from Sinendet leaves by the travelling support- the special plant used by his Kalenjin community to garland heroes and conquerors before he went to the podium to receive his individual gold and team silver.