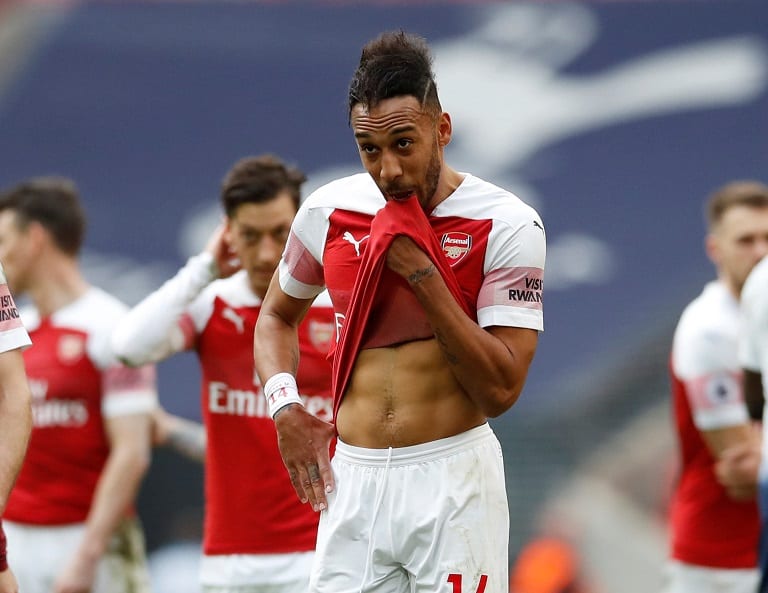 Pierre-Emerick Aubameyang saw a last-minute penalty saved by Hugo Lloris to cost Arsenal victory and ensure Tottenham retained a crucial advantage over their arch-rivals in the battle for a top four place after a dramatic north London derby at Wembley.

Arsenal were then handed a golden opportunity to close to within one point of Spurs after Davinson Sanchez fouled Aubameyang but the striker’s tame penalty was easily saved low to his right by the diving Lloris.

And to add to the late chaos, Arsenal’s Lucas Torreira was sent off for a reckless challenge on Danny Rose in the closing seconds.

After Ramsey’s strike, keeper Bernd Leno kept Arsenal on level terms with a miraculous double save from Christian Eriksen and Moussa Sissoko but the Gunners paid a heavy price for a glaring second-half miss from striker Alexandre Lacazette before Aubamayeng’s wayward spot-kick.

Lacazette failed to hit the target from eight yards and Spurs took advantage, Kane scoring from the spot to equalise after referee Anthony Taylor adjudged he was fouled by Shkodran Mustafi.

Arsenal were also angry as they believed offside should have been given in the build-up but Kane stayed calm amid the chaos to send Leno the wrong way from the spot for his ninth goal in this fixture and keep Spurs four points ahead of Unai Emery’s side.

The Gunners, however, have only themselves to blame after spurning that late chance to seal a league double over Spurs.

Spurs proved once again they possess real resilience as they battled to earn this point – but there is no escaping this has been an indifferent week for Pochettino’s side.

Seven days ago, Tottenham still harboured outside hopes of the Premier League title but a return of one point from away games at Burnley and Chelsea and this Wembley derby against Arsenal have snuffed out those aspirations.

And in the end, they will be grateful to Arsenal’s wastefulness for a point which maintains that crucial four-point gap over their rivals in fourth and six over Manchester United in fifth.

There were pluses for Spurs in the outstanding performance of Moussa Sissoko but they currently look a side short on spark, summed up by Kieran Trippier’s lack of confidence, the defender who was an England hero when they reached the World Cup semi-final in the summer feeling the full fury of his own fans for one wayward second-half cross.

Tottenham can at least look at that important advantage over Arsenal but they looked short of energy and inspiration here as they take a 3-0 advantage to Borussia Dortmund on Tuesday for the second leg of their Champions League last-16 tie.