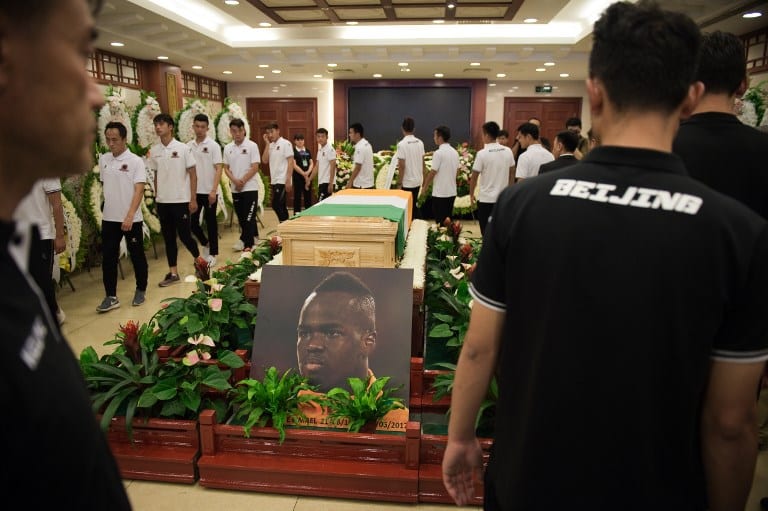 Players from a Beijing football club bowed around the flag-draped coffin of their late Ivorian team-mate Cheick Tiote on Tuesday in an emotional farewell a week after he suddenly collapsed during training.

His brother, fans, friends and Ivory Coast embassy officials also attended the ceremony at a funeral home to honour the 30-year-old midfielder, who died after fainting during practise with second division side Beijing Enterprises on June 5.

Tiote was capped 52 times for Ivory Coast, winning the Africa Cup of Nations in 2015.

His death shocked the football world, reverberating in England, where he played for seven years at Newcastle United before joining the Beijing team in February.

“He was like a brother. We shared a lot in life. His family was my family,” said Senegalese forward Papiss Cisse, who was with Tiote at Newcastle and now plays for Shandong Luneng of the Chinese Super League.

“I experienced extraordinary moments with this gentleman. And today he is gone,” Cisse said as he wept in front of the coffin, which was covered in the flag of Ivory Coast.

A large picture of Tiote rested in front of the coffin, surrounded by white flowers.

“His death saddens us. He had just arrived but he brought a lot to the club,” said Zhang Yan, a fan wearing the club’s red and blue jersey.

Another fan, Chinese school student Zhao Ruijia, said she had had a meal with Tiote five days before his death.

“When I learned that he died, I couldn’t believe it. I was devastated,” she said.

“He was a good person. He encouraged me before an exam, but the days of the test last week, I couldn’t get his encouragement,” she said tearfully.

Tiote’s body is expected to arrive back in the Ivory Coast on Thursday and more tributes are planned for the player.

The national team returned to Abidjan on Monday after an Africa Cup of Nations qualifying defeat to Guinea and presented their condolences to the player’s family.