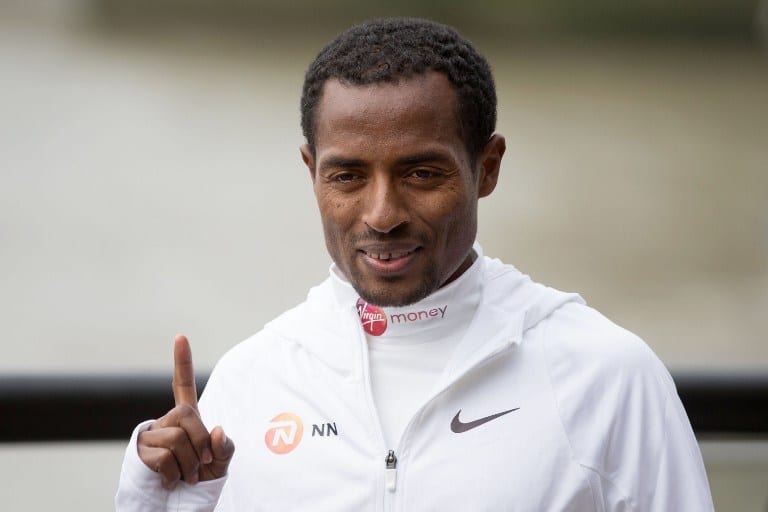 Ethiopian track legend Kenenisa Bekele believes he is in the sort of form to break Eliud Kipchoge’s fastest ever time in the London Marathon on Sunday.

Should the 34-year-old – who still holds the 5,000 and 10,000 metres world records – manage that it would be a fitting end to a week that has seen the great race receive even more advance publicity than usual.

That has been thanks to Britain’s Prince Harry revealing earlier this week he had sought help from mental health professionals four years ago to resolve the issues arising from the death of his mother Princess Diana in 1997.

Indeed the Heads Together campaign – which is led by Harry, Prince William and the latter’s wife Kate and aims to remove the stigma surrounding mental health – is the official charity for the race this year and it has a particular interest in ten runners with mental health issues running as the ‘Mind Over Marathon’ group.

“A great man, and a beacon of how to speak out if you’re suffering in silence,” one of the ten runners Jake Tyler remarked on his Instagram account about Harry and his frank admissions.

While those ten will not only raise awareness for the mentally fragile but also badly needed funds, Bekele will be seeking to rake in the cash himself and produce an eye-catching performance.

Bekele, who is also a five-time world track champion, responded later in the year by running the fastest marathon of 2016 in Berlin and he feels he is in that sort of shape for Sunday’s renewal.

“I am in just as good shape as I was in Berlin last year,” he told the official race website.

“I think I can improve my personal best, that would be perfect for me.

“Of course, in a marathon anything can happen, but I can say I am ready and full of confidence.”

Bekele, who seamlessly replaced iconic compatriot Haile Gebrselassie as the king of distance running, says being snubbed for the Olympics last year made his blood boil and motivated him to prove a point to the Ethiopian selectors.

“I was angry about not going to Rio,” said Bekele.

“But because of that I am motivated now all the time to run well.

“Every time I run a marathon now I am excited because each one is really challenging and all the time you are facing different competitors and a different pace.”

The selectors may have wished they had opted for Bekele in Rio as one of his compatriots silver medallist Feyisa Lilesa caused a scandal back home after crossing his arms over his head in protest at the Ethiopian crackdown on political dissent.

Lilesa — who has relatives in prison in Ethiopia – is now living in exile in the United States but will oppose Bekele on Sunday, the first time he has competed in London since 2014.

“It has been very difficult for me since the Olympics,” the 27-year-old told the race website.

“I stayed in the US alone for five months before my family joined me, but I am still exiled from my people. They are still dying and being put in jail.

“I am hearing all the time about what’s happening in Ethiopia and when I run I am remembering what’s going on.

“It is a very difficult situation. Life is good for me but for my family life has completely changed.”

In the women’s race all eyes will be on Kenyan legend Mary Keitany bidding for a third London Marathon win after 2011 and 2012 to emulate her feat in New York.