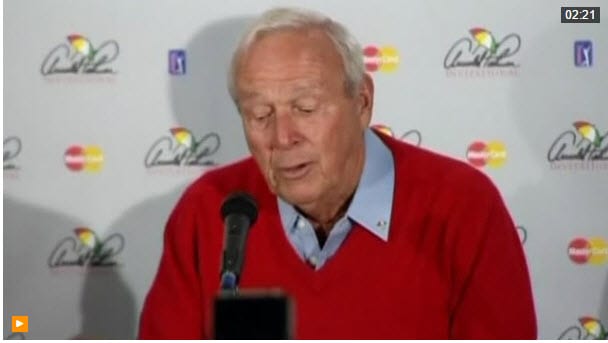 Arnold Palmer, the golf great whose charisma and common touch drew a legion of fans known as “Arnie’s Army” and propelled the game into the mainstream, died at the age of 87.

“Arnold Palmer will always be a champion, in every sense of the word,” the US Golf Association said in a statement mourning the death of “golf’s greatest ambassador.”

“He inspired generations to love golf by sharing his competitive spirit, displaying sportsmanship, caring for golfers and golf fans, and serving as a lifelong ambassador for the sport.

“The game is indeed better because of him, and in so many ways, will never be the same.”

Palmer, a native of Latrobe, Pennsylvania, died at UPMC Presbyterian Hospital in Pittsburgh, where he had been since Thursday while undergoing heart tests, the Pittsburgh Post-Gazette reported.

No cause of death was immediately given.

“We just lost one of the incredible people in the game of golf and in all of sports,” 18-time major champion Jack Nicklaus said.

“He has always been a fighter and he never gave up on anything. He didn’t give up even now. Maybe his body did, but I know Arnold’s will and spirit did not.”

His go-for-broke style enthralled fans, and he became one of golf’s first television superstars, helping make the sport accessible to a much wider audience.

His rise — along with those of Nicklaus and Gary Player — set the stage for the sport’s huge broadcast rights fees and prize money riches, which were later enhanced by the success of Tiger Woods.

“Thanks Arnold for your friendship, counsel and a lot of laughs,” Woods said on Twitter after news of Palmer’s death. “Your philanthropy and humility are part of your legend.

“It’s hard to imagine golf without you or anyone more important to the game than the King.”

Palmer looked frail when he joined fellow icons Player and Nicklaus for the ceremonial first tee shot at the Masters in April.

For the first time in 10 years, he didn’t swing a club, instead sitting in a chair to watch the spectacle.

In June, he elected not to travel to Oakmont, Pennsylvania, for the US Open in his home state.

Although Palmer’s presence around the game had become less regular in recent years, today’s young stars were aware of the iconic player’s impact on their sport.

Palmer, born September 10, 1929, was the son of the club professional and greens superintendent at Latrobe Country Club. Palmer started caddying at 11 and went on to work almost every job at the club.

Fans identified with his blue-collar background, and he never forgot his roots even as he piloted his own jet to charity functions and business meetings and became a friend of presidents and corporate big-wigs.

Palmer attended Wake Forest University on a golf scholarship. At age 24, he won the 1954 US Amateur at the Country Club of Detroit.

Later that year, Palmer turned pro. In a career that spanned more than six decades, he won 62 PGA Tour titles, putting him at fifth on the Tour’s all-time victory rankings.

He led the PGA Tour money list four times, and was the first player to win more than $100,000 in a season.

He played on six Ryder Cup teams and was the winning captain twice.

In 1974, Palmer was one of the original inductees into the World Golf Hall of Fame.

“For all who love the game of golf and love to see it played, there has never been a sight quite like Arnold Palmer walking down the fairway toward the 18th green,” said former president George W. Bush, who awarded him the Presidential Medal of Freedom in 2004.

In 2012, Palmer was awarded the Congressional Gold Medal, giving him both of the highest honors the United States can give to a civilian.